The Academy of Sociology, founded in 2017, will host its second bi-annual conference, titled “Digital Societies”, at the University of Konstanz from 25 to 27 September 2019. We spoke with the academy's chair, Thomas Hinz, a sociology professor in Konstanz, about the topics of the conference and the foundation of the academy

Professor Hinz, the second conference of the Academy of Sociology (AS) is entitled “Digital Societies”. What will be the main topic of the conference?

Professor Thomas Hinz: Everybody is talking about digitalization. Society has huge expectations about the benefits that digitalization has to offer and, of course, huge fears about its risks. Sometimes people seem to forget that digitalization has already impacted the lives of many people and societies around the world – not only in Europe or the western world. The aim of the conference is to bring together sociological knowledge of the potentials and possible risks of digitalization. Because of the abundance of data it provides, digitalization stimulates a new type of research in the social sciences. We also expect to gain new impulses from the discussion on research methods.

What do you plan to discuss?

Glancing at our conference programme, you will see that there will be certain focus areas of interest. For example, several sessions focus on the labour market and qualifications, the polarization of opinions on digital platforms and the development of digital divides in societies. In addition, we will host sessions on network research, trust issues in anonymous online markets as well as the use of digital technology in providing social control. Researchers will also present new work in the field of analytical-empirical sociology that does not primarily have to do with digitalization, such as research into the sociology of families and migration. We plan to host conferences every two years that focus on current highlights in sociology research.

The AS is a German organization, but will international speakers be there as well?

It is indeed very important to us that we connect German sociology research with our broader international scientific community. We have chosen English as our conference language and will be hosting a range of international speakers. We are really looking forward to the in-depth exchange.

What are your expectations of the conference?

Participants will gain an excellent overview of current research in the field of analytical-empirical sociology on the aspects of social change I mentioned earlier. At the same time, I look forward to getting a wide range of impulses for new research projects. This is the advantage of conferences: being able to discuss one’s own ideas with others and gain new perspectives in the process.

Professor Thomas Hinz, Chair of Empirical Social Research at the University of Konstanz

The academy is the second organization for research in sociology to be founded in Germany, after the Deutsche Gesellschaft für Soziologie (German sociological association, DGS). Why was the academy founded?

The Academy of Sociology was founded with the intent to connect sociological research more closely with both social scientists and the general public as well as to expand exchange with related fields, such as economics, political science and psychology. Our aim is that sociology increasingly be called upon as a source of socially relevant knowledge, for example, by lending its expertise in certain areas. We also want to support younger sociologists effectively in their academic development.

Critics would say that founding this new organization would split the German field of sociology. What would you say to them?

I believe the academy fills a gap left open by the DGS, like, for example, that few analytical-empirical sociologists are active in the DGS’ decision-making bodies. In my opinion, the DGS often has an unclear scientific profile or has difficulty distinguishing between research results and normative judgements. I can understand how some members of DGS leadership would consider our organization to be troublesome or even presumptuous. However, I do not consider the two professional organizations to be competitors. Many researchers are active in both the Academy of Sociology and the DGS.

What are such professional organizations responsible for?

The main purpose is to represent the interests of the relevant scientific fields, for example, before the German Research Foundation (DFG), the German Data Forum (RatSWD) and the German Council of Science and Humanities (WR). For example, the Academy of Sociology has developed measures for the most open and productive use of research data possible. These measures are then discussed with scientists in other fields. Such positions will be agreed upon at the general meeting which will take place alongside the conference. Anyone who is interested is welcome to attend and get to know our professional organization.

The AS statutes also mention providing policy advice. Is it the academy’s goal to promote transfer activities that take sociologists outside the university setting?

The Academy of Sociology advocates for using the results of research, often extensively supported by public funding, in political discourse. Of course, it is critical that the standards for scientific research are met when such controversial social topics are examined. In order to do so, sociologists will need to communicate with many different social actors, both inside the political system and beyond. This is often something that we, as sociologists, must still learn to do. 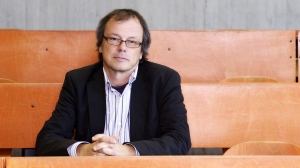 Professor Thomas Hinz has been Chair of Empirical Social Research at the University of Konstanz since 2004. His main research areas include the methodologies of empirical social research, labour market sociology, social structure analysis, organizational and economic sociology as well as the sociology of education. Thomas Hinz has chaired the Academy of Sociology since it was founded in 2017.