Binary mesocrystals from the nano-building kit

Team led by Konstanz researcher produces three-dimensional mesocrystals from two different types of nanocrystals - platinum and magnetite - for the first time. This lays the foundation for the synthesis of novel nanostructured solids with previously unexplored properties.

Mesocrystals are a class of solids formed by the regular arrangement of nanocrystals, which are tiny nanoparticles that have unique properties due to their small size. In mesocrystals, these take on a highly organized, superordinate form in a densely packed grid. A German-Swiss research team led by Professor Helmut Cölfen, a chemist from Konstanz, has now succeeded in synthesizing particularly complex mesocrystals with largely unknown chemical and physical properties and in shedding light on their structure. 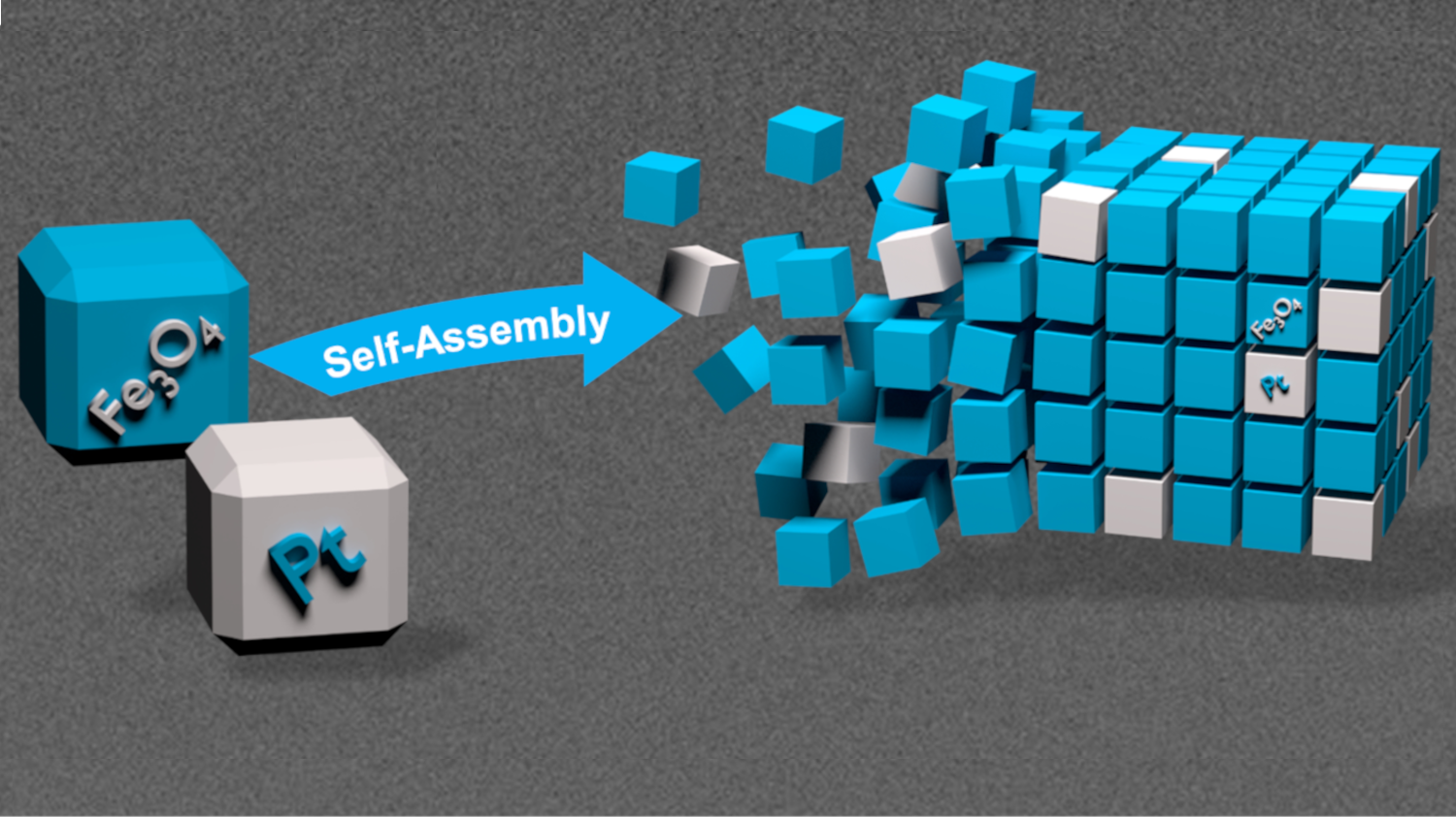 Mesocrystals are formed by self-organization of nanocrystals, in this case platinum and magnetite nanocubes, into superordinate, highly organized structures. Image: Christian Jenewein

The synthetic pathway and structural characterization of the 3D binary mesocrystals of platinum and magnetite nanocrystals have just been described in the journal Angewandte Chemie. The results of the study are the first step towards a potential "building set system" that might make it possible in the future to combine the properties of different nanocrystals in a targeted manner and transfer them to the more manageable micro world – resulting in a multitude of possible advantages and applications.

Nanotechnology in Ancient Rome
The basic building blocks of mesocrystals are nanocrystals. Due to their small size, which can be even smaller than that of viruses, they display unique properties that larger particles of the same material lack. This includes the complicated-sounding 'quantum size effect', which can be observed in semiconductor nanoparticles with a diameter in the nanometre range resulting in size-dependent colour, which plays an important role in the production of LEDs, among other things. Another example is the surface plasmon resonance effect, which gives metal nanoparticles size-dependent optical properties. 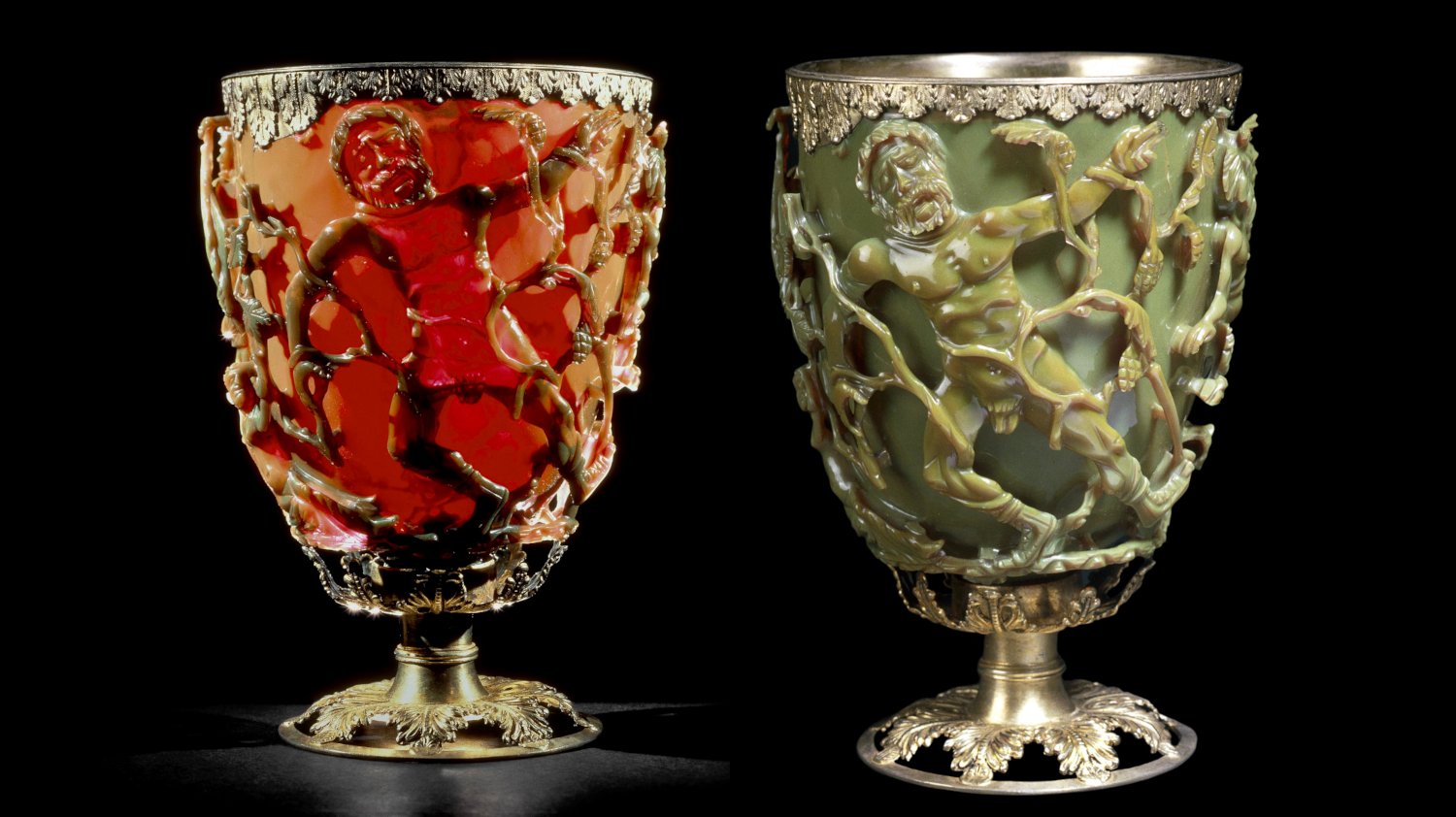 The Lycurgus Cup changes colour depending on the incidence of light and the viewing angle.
For the illustration, two original images were merged by Daniel Schmidtke. Copyright: The Trustees of the British Museum; licence: CC BY-NC-SA 4.0

Mankind made use of some of these nano-properties as early as the times of the Roman Empire. A famous example is the Lycurgus Cup from the fourth century, now on display in the British Museum, whose glass elements change colour depending on the incidence of light and the viewing angle. The reason: The cup's glass is impregnated with gold and silver nanoparticles that demonstrate the surface plasmon resonance effect. The strong and durable colours of medieval church windows, too, are based on this effect, as there are gold nanoparticles cast into the glass of the windows.

The best from two worlds
"By creating mesocrystals from nanocrystals, it may now be possible to transfer these and other properties, which were previously reserved for the smallest solids, to solids with sizes in the micrometre range," explains Helmut Cölfen, professor of physical chemistry at the University of Konstanz and head of the research project. "This makes mesocrystals extremely interesting objects in materials research".

The micrometre scale includes objects up to 100,000 times larger than nanoparticles, which is still very small, but makes a huge difference in the manageability of the particles. For example, particles with sizes in the micrometre range can be filtered much better than nanoparticles. In case of solids such as mesocrystals, this also eliminates a decisive disadvantage of nanoparticles: their potential toxicity. In the past, nanoparticles have increasingly become the focus of health research, as they can easily enter the body through the skin, food or breath when in an unbound state. "Due to their small size, nanoparticles can overcome important protective barriers of the human body. The significantly larger mesocrystals, by contrast, cannot," says Helmut Cölfen.

Reaching the goal with patience
As described in the current study, in order to produce the so far unique 3D binary mesocrystals from platinum and magnetite nanocrystals described in the current study, these cube-shaped basic building blocks are first put in a solvent and a dispersion is created. The mixing ratio plays a decisive role here and is later reflected in the composition of the mesocrystal. "If we were to take a drop of the building block mixture and simply let the solvent evaporate, we would also obtain a binary mesocrystal, but it would be two-dimensional instead of three-dimensional. Therefore we had to come up with something new to create three-dimensional mesocrystals," reports Helmut Cölfen. 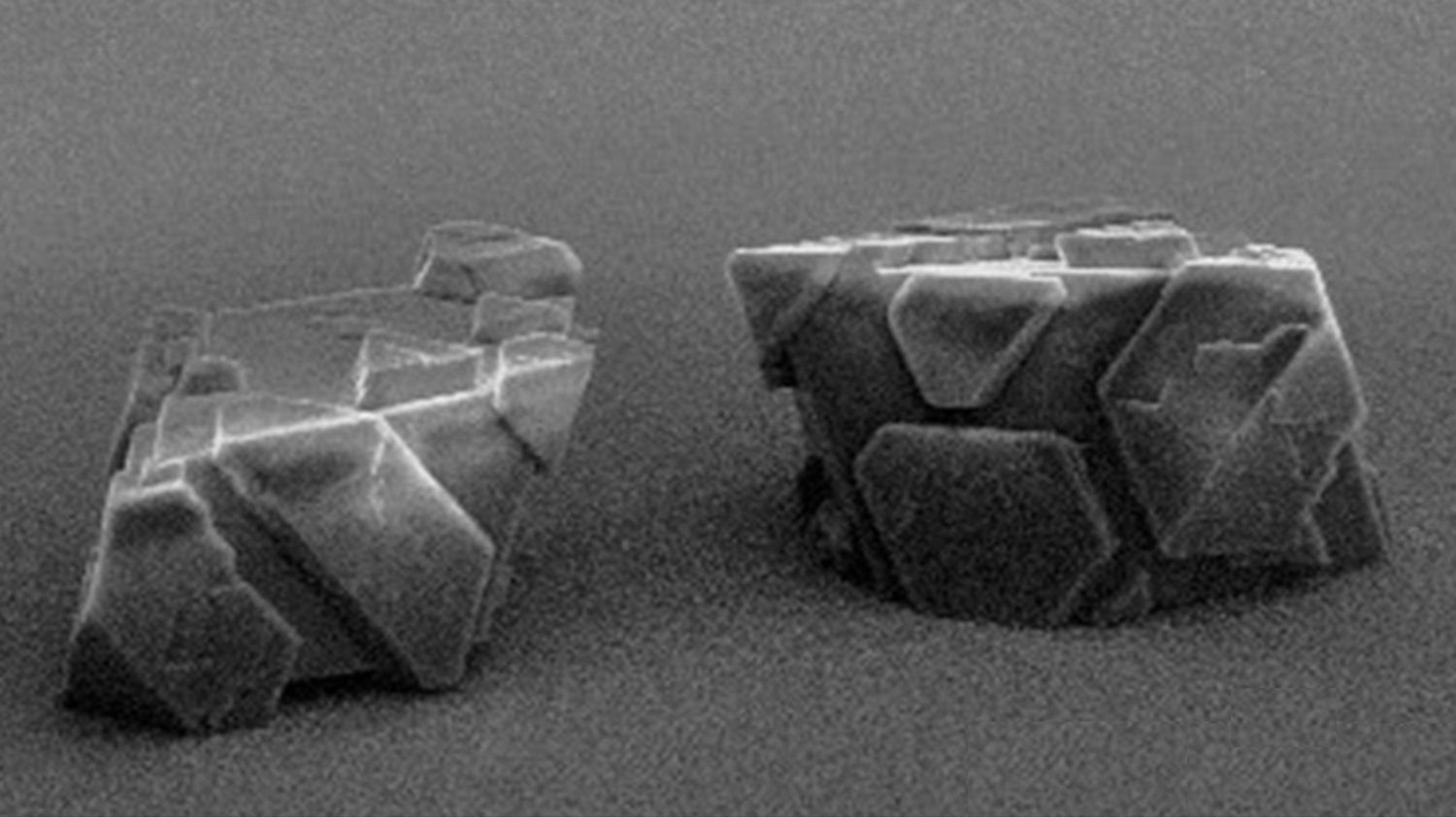 The key to success: Deceleration. For this purpose, the dispersion with the nanocrystals is put in an additional, closed container containing a chemical in which the nanocrystals cannot dissolve - a "non-solvent", so to speak. After that, you just have to wait and see. Slowly, over the course of several days, the non-solvent gradually evaporates and increasingly mixes with the nanocrystal dispersion. "At some point, the nanocrystals begin to interact by docking to each other due to the increase of non-solvent in the dispersion. Normally, something like this happens quickly and uncontrollably. By extending the process via the evaporation of the non-solvent over several days and thus reducing the effect of the actual solvent only gradually instead of suddenly, the process is much more controlled. The result of our method is 'large', three-dimensional mesocrystals", explains Helmut Cölfen.

Novel, unexplored properties emerge
After the Konstanz chemists led by Helmut Cölfen successfully synthesized the three-dimensional mesocrystals, they characterized their exact structure in cooperation with Swiss colleagues from the Centre for X-ray Analysis at the Swiss Federal Laboratories for Materials Science and Technology (Empa) in St. Gallen and the Paul Scherrer Institute (PSI) in Villingen. They were able to demonstrate that actual three-dimensional, binary mesocrystals of platinum and magnetite nanocrystals are formed during synthesis. So far, the researchers can only speculate about the complete physical and chemical properties of these novel solids. 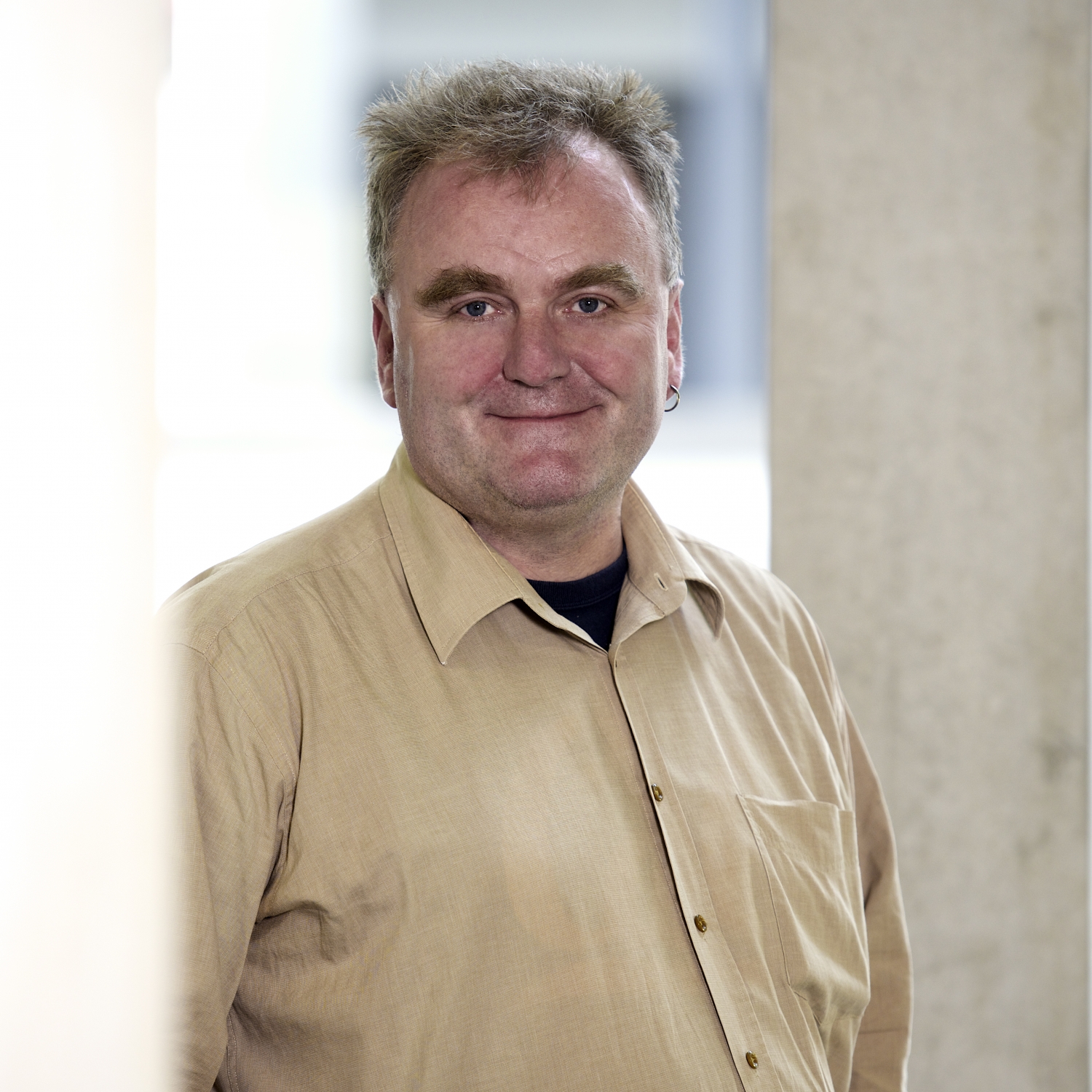 “In our binary mesocrystals, we have successfully combined magnetite and platinum nanocrystals into an ordered superstructure. Magnetite is, as the name suggests, magnetic. Platinum, on the other hand, is a very good catalyst - i.e. accelerator - for many chemical reactions. We assume that our mesocrystals combine both of these properties.“

Helmut Cölfen, Professor of Physical Chemistry at the University of Konstanz, Group Leader of the research project

The combination of the two properties would then result in a very good chemical catalyst due to the platinum component, which in turn could be easily separated and recovered with a magnet after use because of the magnetite component. The valuable material platinum would not be lost. However, mesocrystals not only preserve the properties of the nanocrystals they contain, they also possess properties that go beyond those of their individual building blocks. "When the individual nanocrystals interact and couple in the superordinate structure of the mesocrystal, completely new, collective properties are created that the individual particles themselves do not have at all," Helmut Cölfen explains enthusiastically and continues: "Exploring these in detail in the future will be extremely exciting." 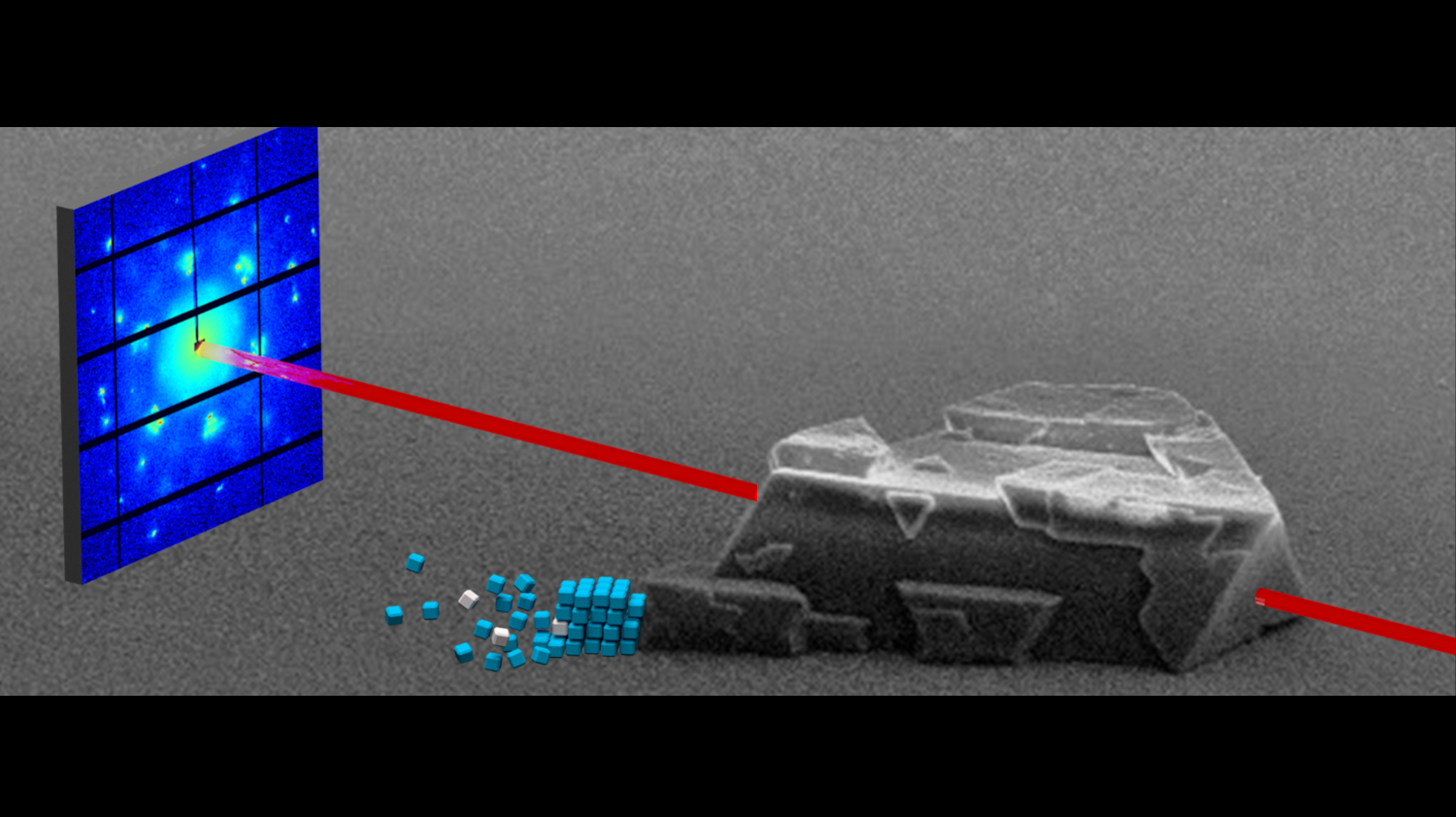 Small-angle X-ray scattering (SAXS) at the Paul Scherrer Institute (PSI) in Villingen was used, among other methods, to characterize the exact structure of the three-dimensional binary mesocrystals. Image: Christian Jenewein

The first step towards a potential building kit system
The production of three-dimensional mesocrystals from platinum and magnetite nanocubes is not to be the end of the story. On the contrary, the aim is to combine other nanocrystals, too, in the future using the developed process. According to the researchers, their results are rather the first step towards a potential building kit system: "Our goal is to refine the method so that, ideally, a wide variety of nanocrystals and their properties can be combined in any way we want - kind of like LEGO bricks," Helmut Cölfen gives an outlook and continues with a smile: "The platinum magnetite mesocrystal would then be the first little tower, so to speak, that we built from our stones."

The research project in which the mesocrystals were created was one of the focal points of the Collaborative Research Centre "Anisotropic Particles as Building Blocks: Tailoring Shape, Interactions and Structures" at the University of Konstanz which is funded by the German Research Foundation (DFG) until the end of the year. "Producing structures like our three-dimensional, binary mesocrystals was precisely one of the goals of this Collaborative Research Centre. What we need to do now is to characterize the interactions between the nano building blocks and to study the resulting, novel properties", concludes Helmut Cölfen.

Caption of the title image: Synthesis and structure characterization of three-dimensional, binary mesocrystals of platinum and magnetite blocks