Fruit bats respond to seasonal changes and often match peaks in resource abundance as Dr Edward Hurme from the Centre for the Advanced Study of Collective Behaviour of the University of Konstanz discovered.

Dr Edward Hurme and several volunteers are standing underneath a tree in Accra. Their gaze is directed towards the sky and their full concentration is on counting fruit bats hanging on the tree above. Like here in Ghana, researchers and volunteers from the Eidolon Monitoring Network count the size of colonies of straw-coloured fruit bats (Eidolon helvum) every month at multiple sites across Africa. Now, the first data of the multi-year study have been analyzed by Dr Edward Hurme. He is a behavioural ecologist at the Cluster of Excellence Centre for the Advanced Study of Collective Behaviour (CASCB) of the University of Konstanz. He conducted this study together with several colleagues, among them Dr Dina Dechmann, group leader at the Max Planck Institute of Animal Behavior, and Professor Martin Wikelski, director of the Max Planck Institute of Animal Behavior, as well as many volunteers. On 28 May 2022, the article was published in the journal Functional Ecology. 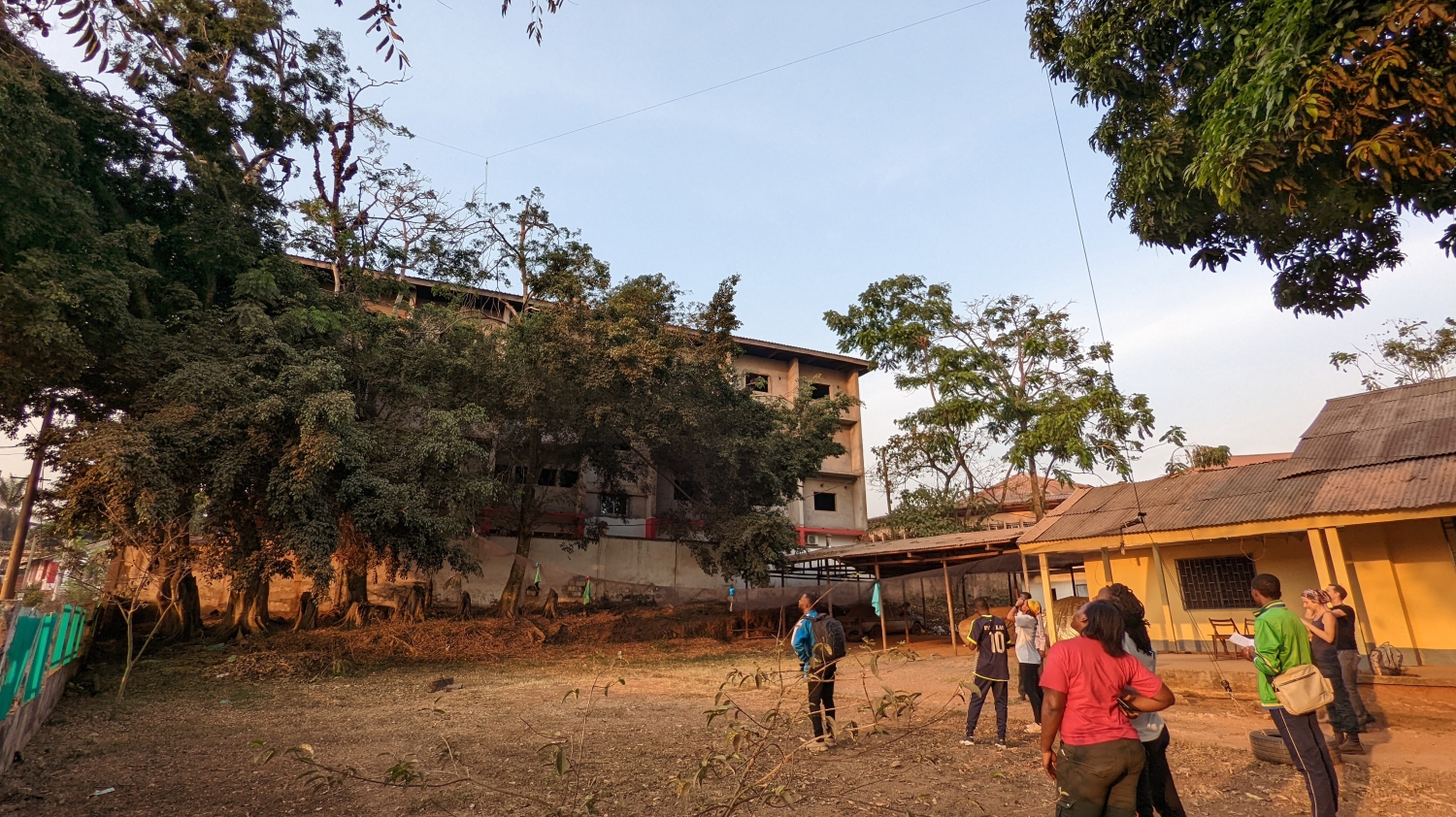 At 17 different location in Subsaharan Africa, researchers and volunteers from the Eidolon Monitoring Network count the size of colonies of straw-coloured fruit bats every month. Here, they count bats in Cameroon.

These fruit bats, with a wingspan of up to 76cm, fly up to one hundred kilometers to a food tree in a given night, and during their seasonal migration, they can fly much further. They are thought to travel over 2500 km during migration, one of the longest migration distances for bats. As they move across sub-Saharan Africa, these animals form huge seasonal colonies of thousands or even more than a million individuals. “It is very impressive when these bats fly out each night”, Hurme reports. 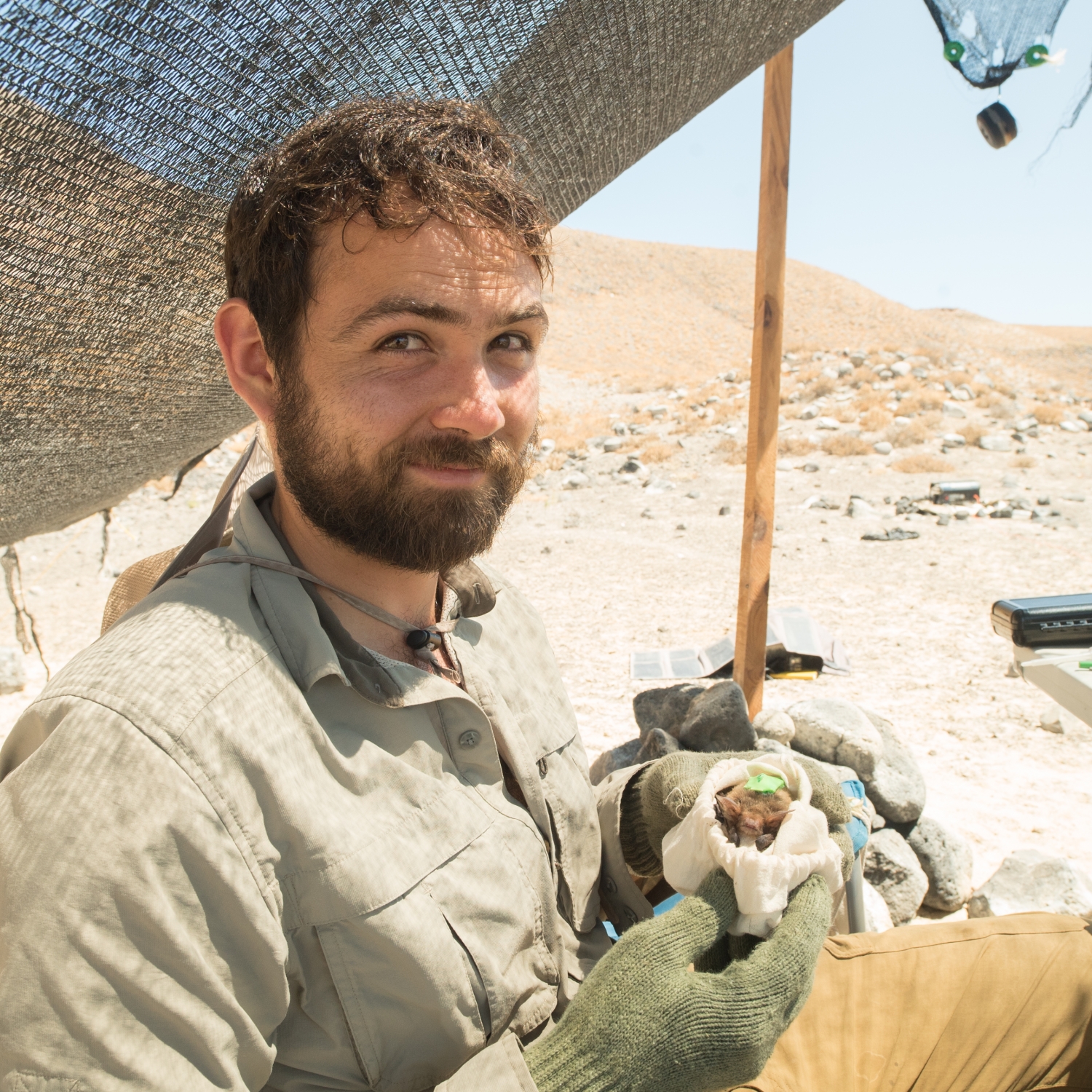 “The role of straw-coloured fruit bats in the ecosystem is underappreciated. They help pollinate flowers and disperse seeds from fruits over distances far beyond most other animals. It is therefore really important that these bats continue to move across the landscape, eating a lot of fruits and, in this way, maintaining and promoting the natural ecosystem.”

Fruit bats follow green wave
The monthly counts by the local volunteers in many places are a well spent effort, and important to better understand the migration of the bats. “We found that the colonies themselves have size peaks during the year. These peaks match the start of the growing season which typically begins close to the start of the rainy season. The fruit bats show up in the extremely seasonal areas, such as Mali or Zambia, right when plants are growing the most and food availability is likely to increase rapidly.” That is why the researchers suspect that the bats are able to sense when fruit ripens and follow this food wave, likely indicated by the green wave.

Map of the green wave moving up and down Africa each year. Straw-coloured fruit bats time their migrations to stay at the front of this wave.

Hurme adds: “Straw-coloured fruit bats seem to time their migrations to move into highly seasonal landscapes to exploit short-lived explosions of food in landscapes with low resident numbers of frugivores. The bats also appear to benefit from collective sensing when timing their migrations.” Larger colonies were often better at matching the start of the growing season.

The researchers assume there is a link between rapid changes in colony size and phenological match. This may imply potential collective sensing of the environment. However, concern is also spreading among researchers: “Overall decreasing bat numbers along with various threats might cause this property of large colonies to be lost”, Hurme states.

Tropical bat migration is a rare phenomenon
According to Hurme, there are few other bat species that migrate within the tropics. That is why Hurme and his colleagues were interested in studying this rare behaviour in the straw-coloured fruit bat, which is also one of the most widely distributed and most gregarious African fruit bats. Many migrants that follow the green wave are grazers in the temperate zones that follow the growing grass and thus directly the “green wave”. The straw-coloured fruit bat feeds on fruits, which are not directly indicated by greenness. But the results of the study show that availability of fruit and greenness seem to be linked. In addition, the climate is more consistent throughout the year in the tropics and little was known about how these fruit bats know when and where to migrate. “Migration of fruit bats seems to allow them to stay ahead of dynamic changes in resource availability”, Hurme says. “The bats being extremely mobile means that they can just travel to where the most food is available.” 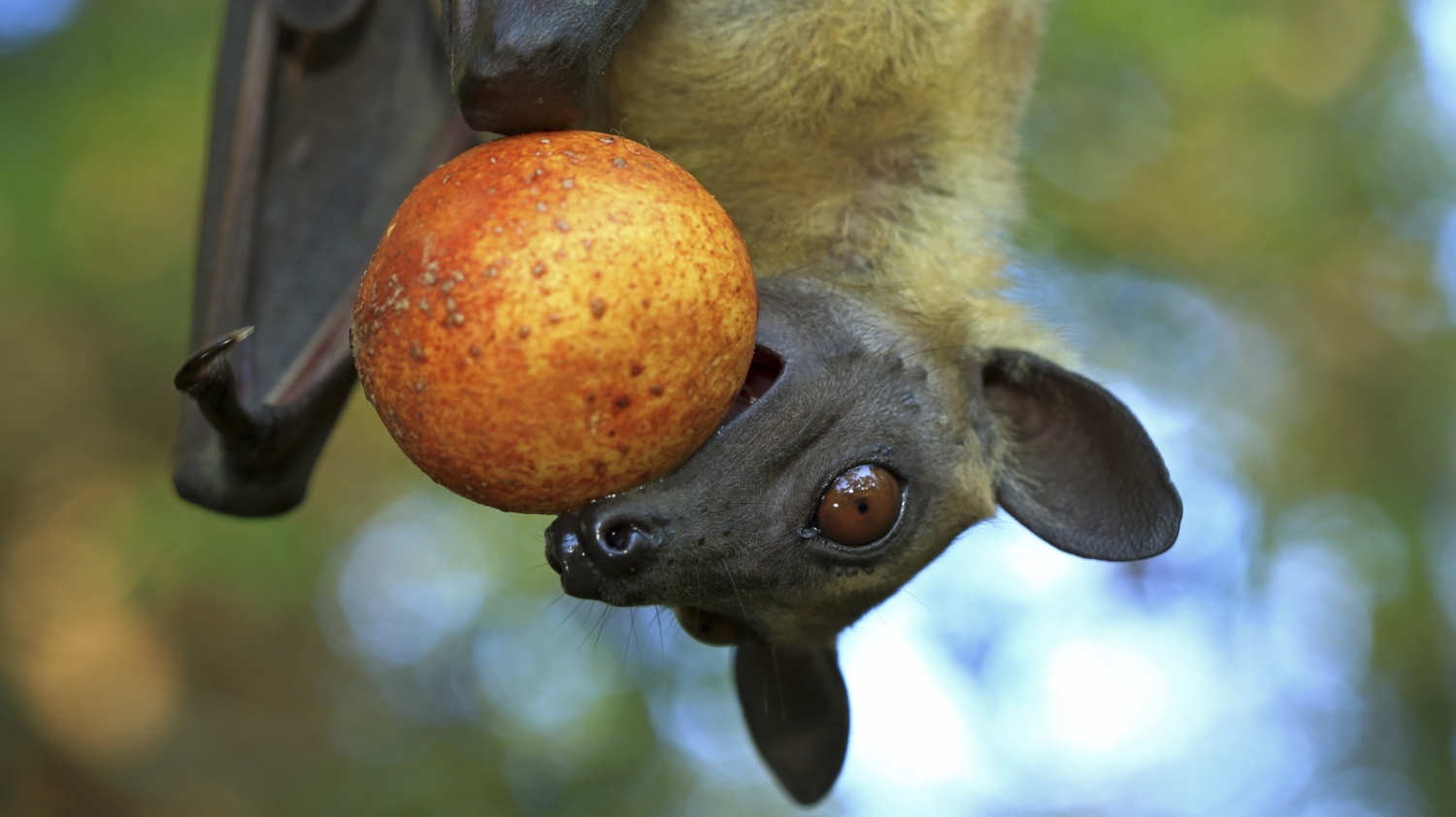 A fruit bat bites into a sugar plum (Uapaca kirkiana)

Decrease incolony size: species conservation urgently necessary
How exactly individual bats migrate and where they go is still mostly a mystery, as currently available tracking devices are still too heavy for them, yet this analysis of colony counts across 17 different locations in Africa greatly advances our understanding of straw-coloured fruit bat migration. “At the Max Planck Institute of Animal Behavior and the CASCB we are interested in fundamental questions of animal behaviour and understanding the mechanisms underlying migration in animals like bats”, says Hurme and adds: “But we also see from the colony counts that this species seems to be declining dramatically in several areas.”

Hurme experienced that the animals are not too popular. “Often people living close to the colonies don’t like the bats. They don’t necessarily want to kill the bats but ask: Why can’t we move them somewhere else?” No wonder, since shade is in demand in warm regions. But when a tree in the garden or park is occupied by the fruit bats it is not the best place to sit under, since you will likely get pooped on, and if people get too tired of the bats they might cut the tree down as a last resort. Since people are trying to get rid of them, fruit bat colonies seem to be pushed around a lot. On top of that, the fruit bats are also hunted, which has an impact on colony size. Last but not least, climate change likely has an impact on migration. 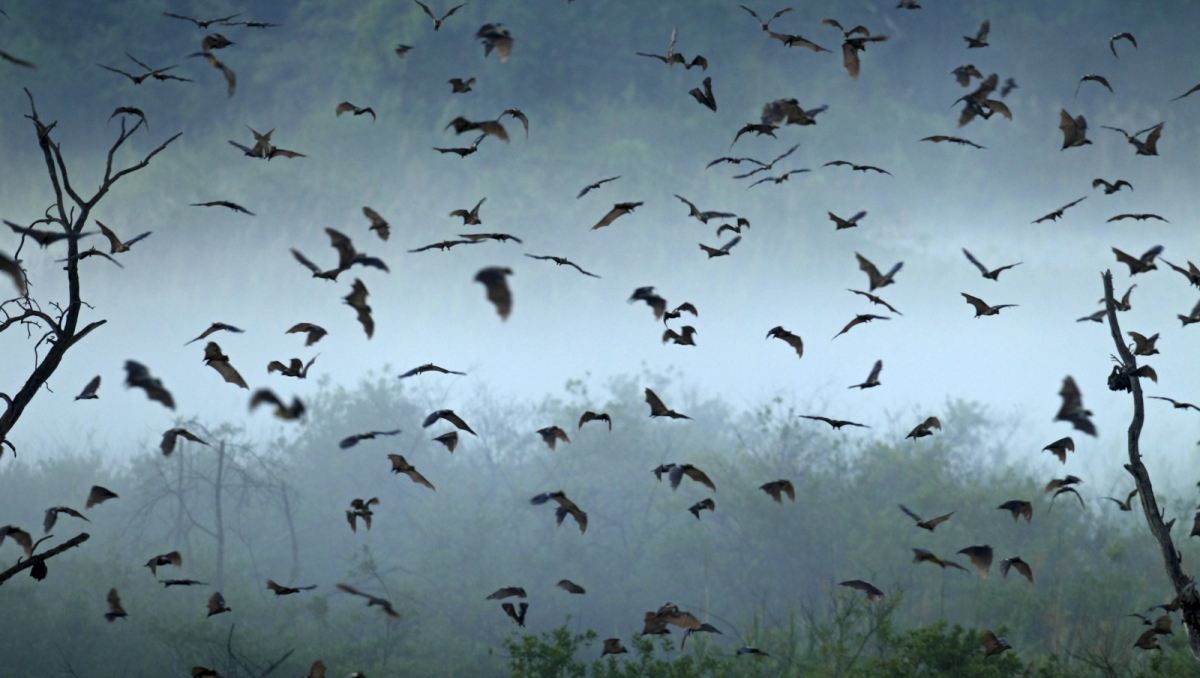 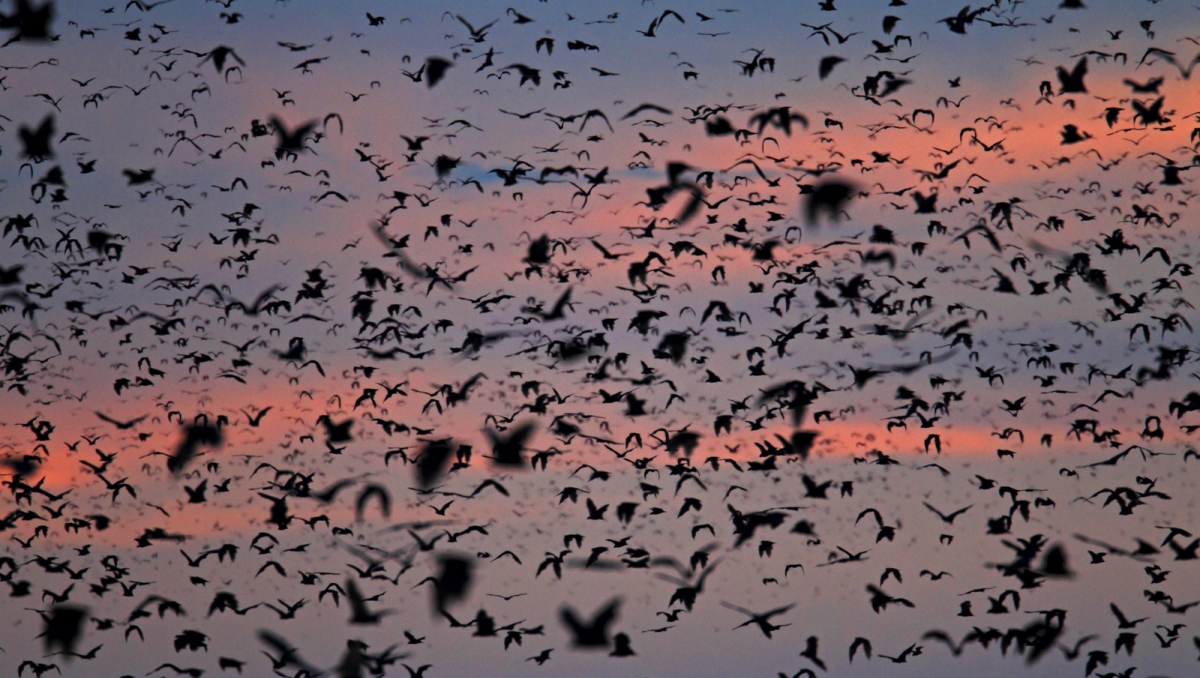 The colonies themselves have size peaks during the year. These peaks match the start of the growing season, which typically begins shortly before the start of the rainy season. The fruit bats show up in the extremely seasonal areas, such as Mali or Zambia, just as plants are growing the most and food availability is likely to increase rapidly.
© Christian Ziegler, Max Planck Institute of Animal Behavior
2 of 11
Hide text 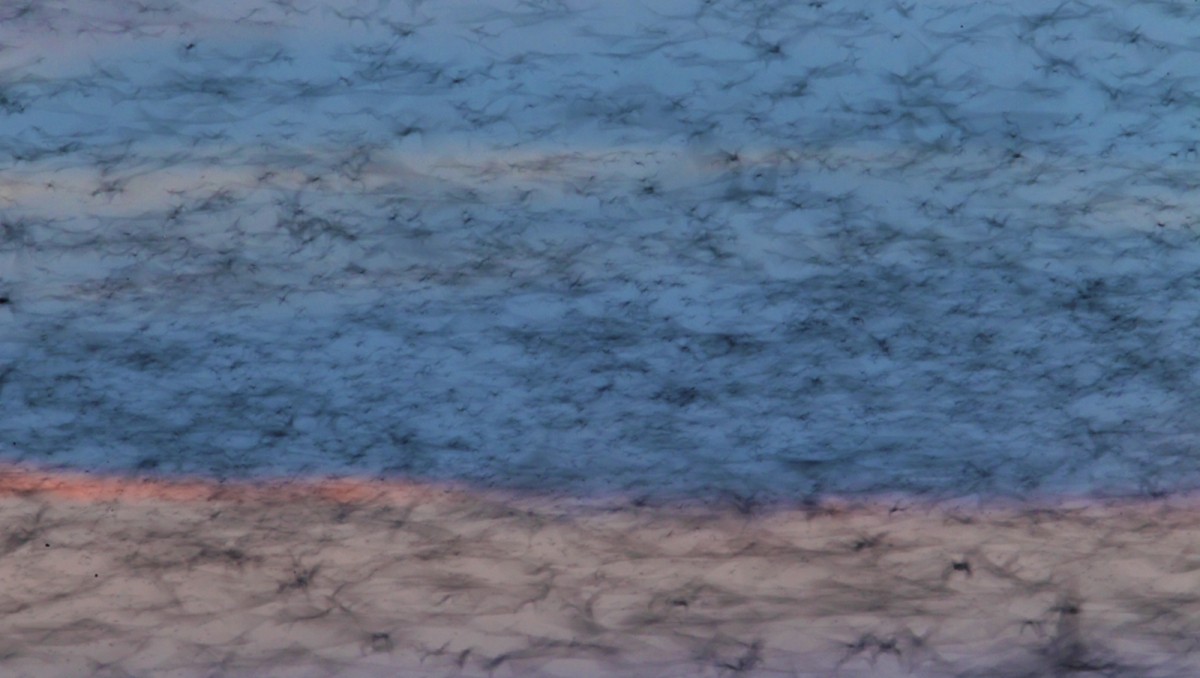 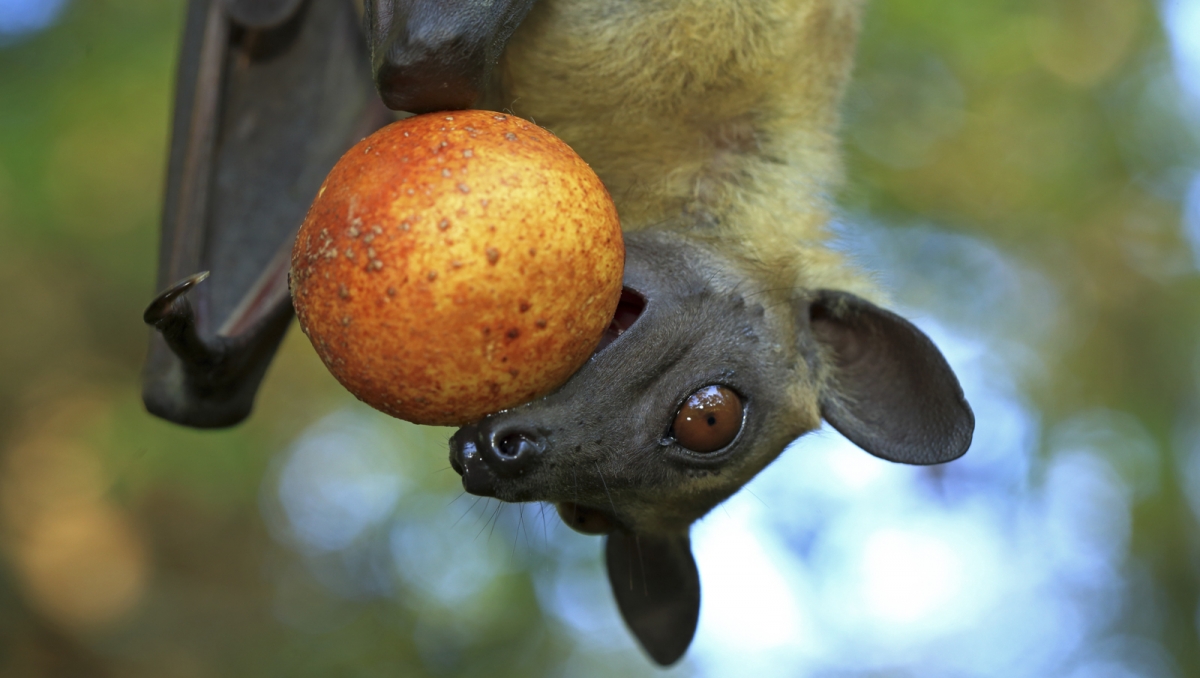 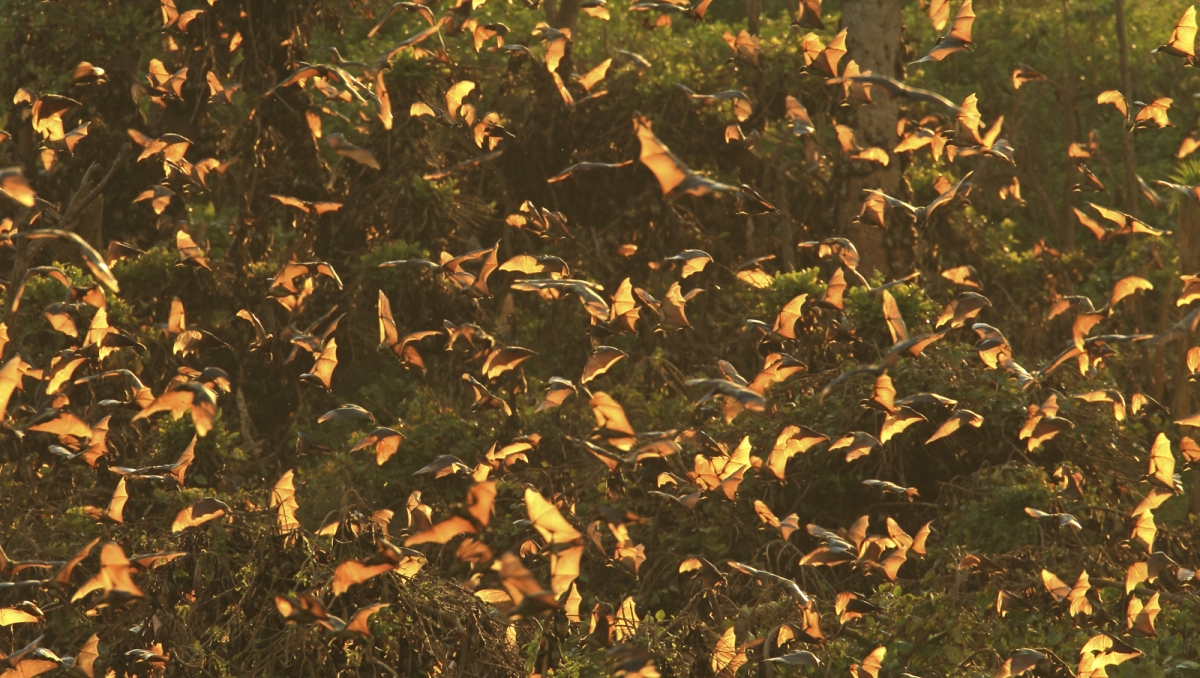 “The role of straw-coloured fruit bats in the ecosystem is underappreciated”, Hurme says. “They help pollinate flowers and disperse seeds from fruits over distances far beyond most other animals.”
© Christian Ziegler, Max Planck Institute of Animal Behavior
5 of 11
Hide text 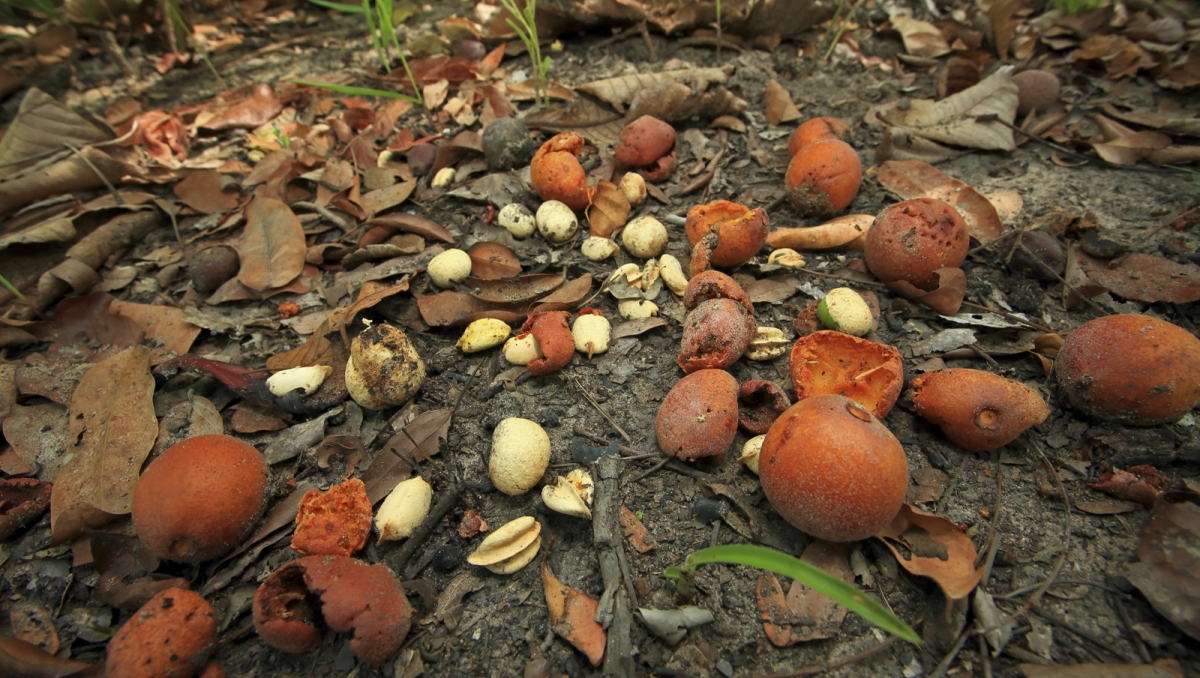 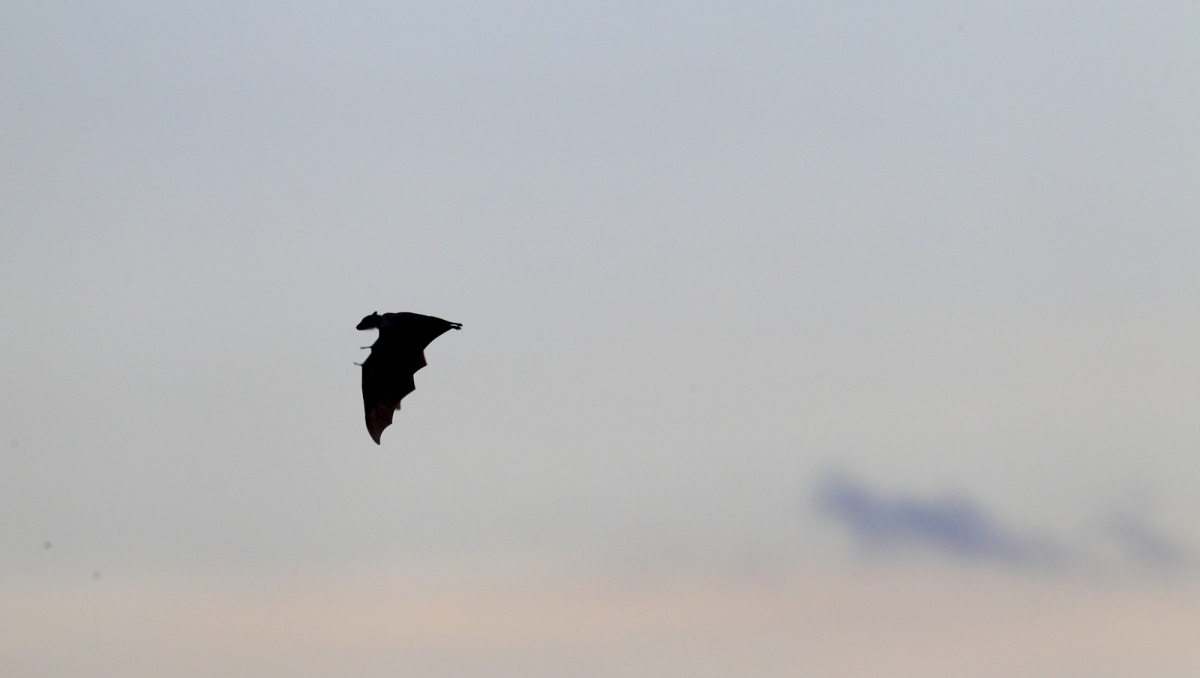 Fruit bats have a wingspan of up to 76 cm.
© Christian Ziegler, Max Planck Institute of Animal Behavior
7 of 11
Hide text 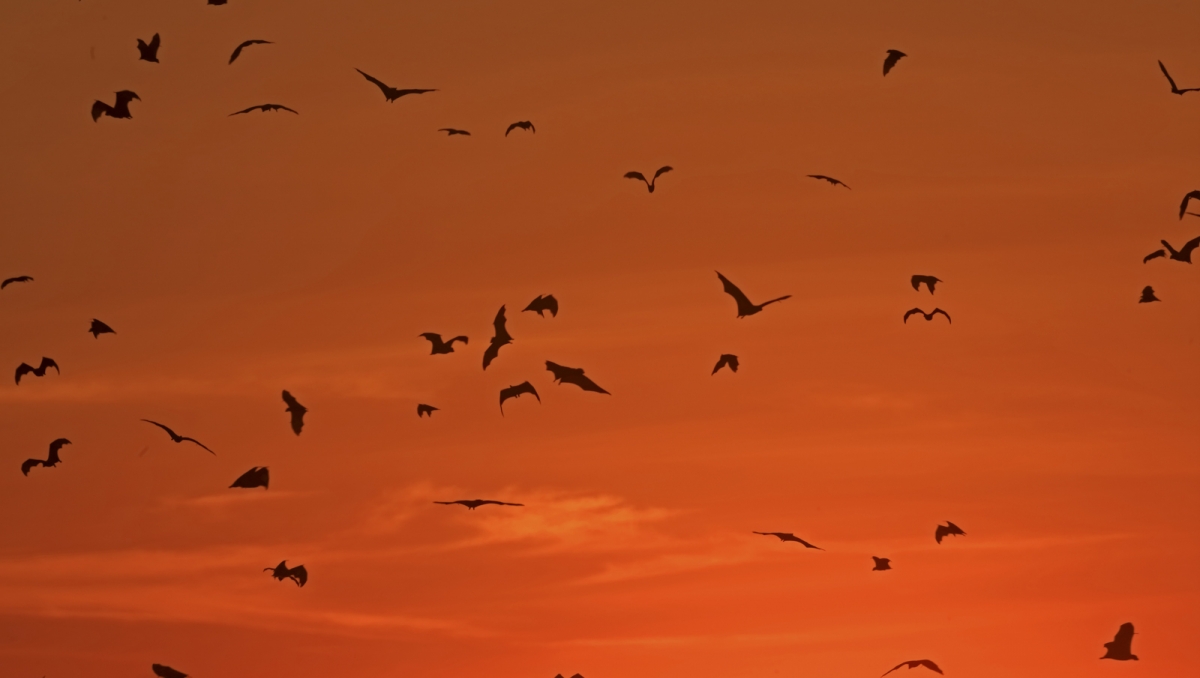 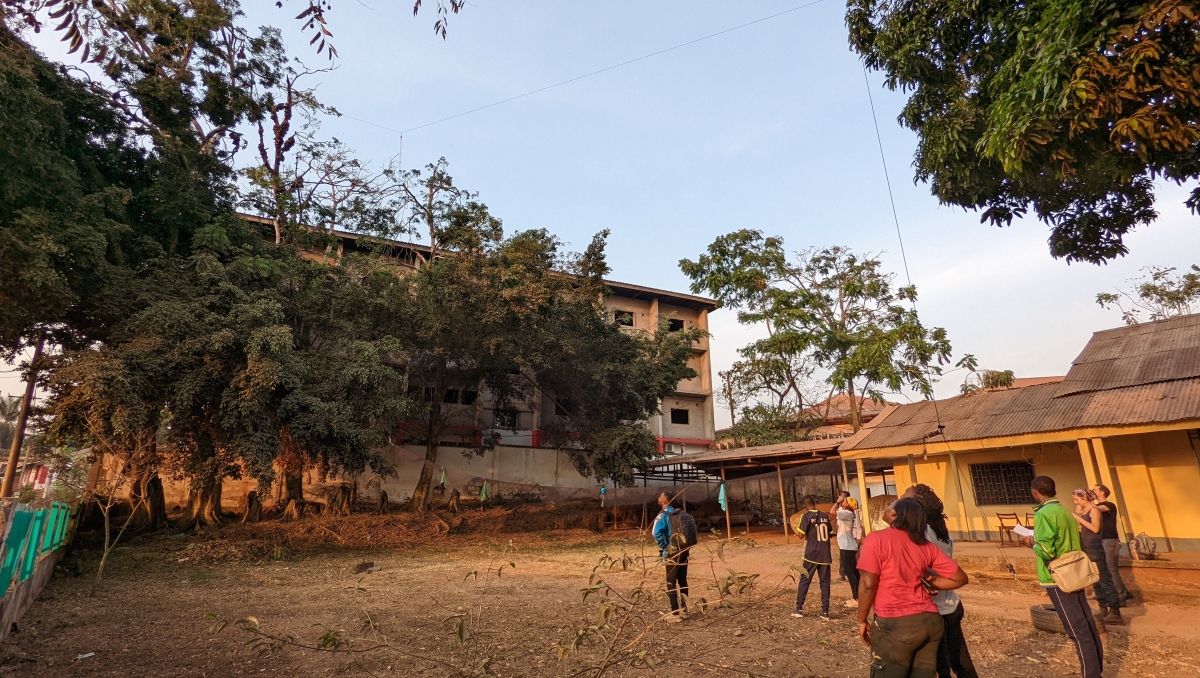 At 17 different location in Subsaharan Africa, researchers and volunteers from the Eidolon Monitoring Network count the size of colonies of straw-coloured fruit bats every month. Here, they count bats in Cameroon.
© Edward Hurme
9 of 11
Hide text 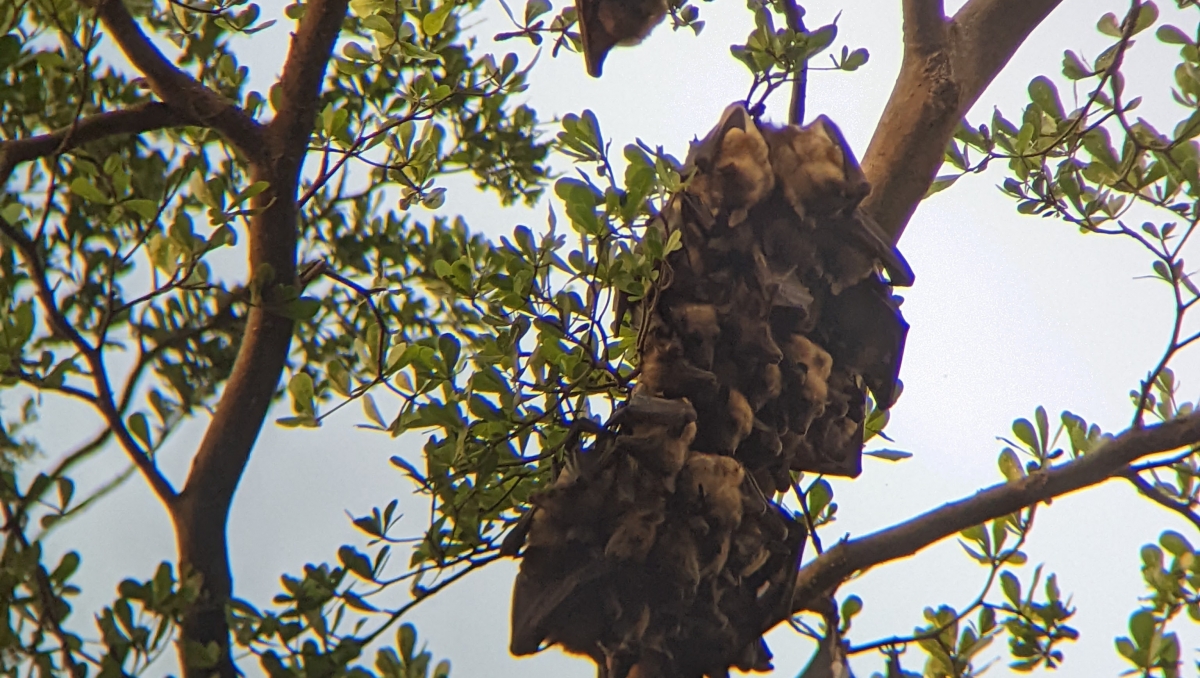 When the fruit bat colonies have settled down to sleep in clusters in the trees, the counting begins. Some of the branches are completely full of fruit bats.
© Edward Hurme
10 of 11
Hide text 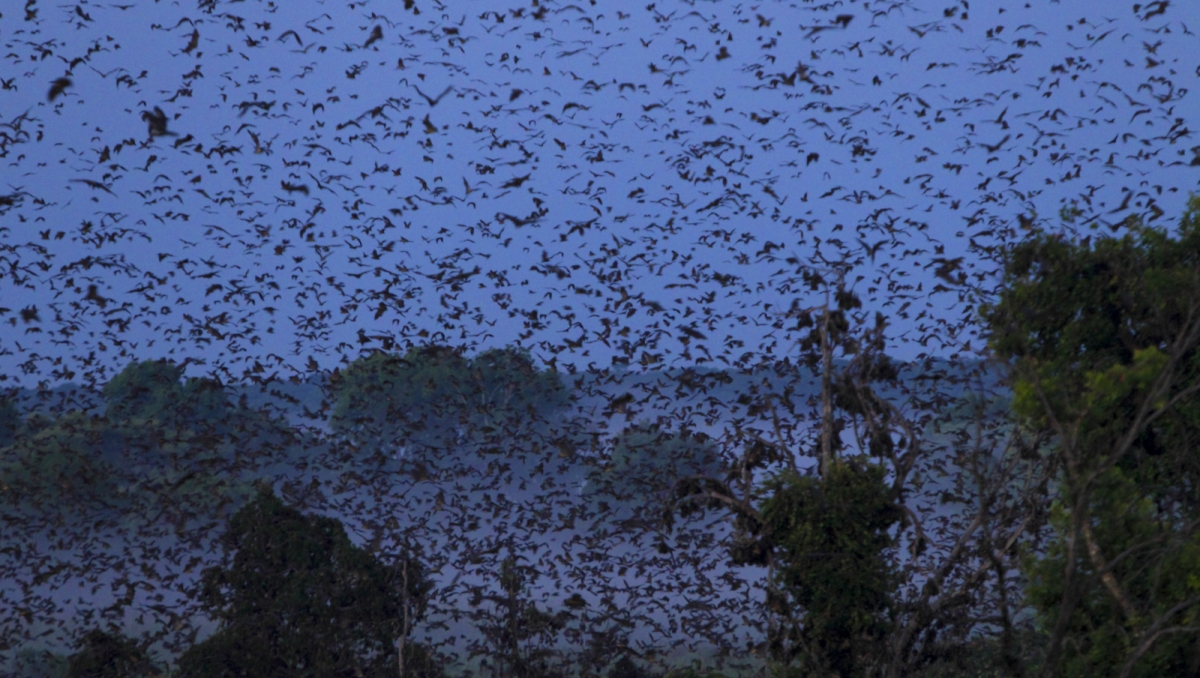 Hurme works to promote better protection of this species and to inform local residents about the positive impact fruit bats have on their ecosystems and biodiversity in general.
© Christian Ziegler, Max Planck Institute of Animal Behavior
11 of 11
Hide text

Strengthening the protection of species is an important aim
That is why Hurme would like to work towards strengthening the protection of this species and informing the local human population about the positive impact fruit bats have on their ecosystems and biodiversity in general. Hurme and his colleagues worry that without proper protections, straw-coloured fruit bats may go the way of the passenger pigeon, a now extinct highly social frugivore, which suddenly went extinct even though numbers still seemed high. Probably they dropped under a minimum population size necessary to maintain the social information network for proper timing of migration. This is why researchers continue to count the bat colony size month by month. The Max Planck Institute of Animal Behavior is also working on new tracking systems to finally monitor individuals over months to years and better understand how these essential African species move across the continent.