When rescuing bats becomes a way of life

Biologist Alona Prylutska and her colleagues from the “Ukrainian Bat Rehabilitation Center” in Kharkiv work hard every day to save bats. The war is making their work difficult – but they are keeping it up nevertheless. Since November 2022, Alona Prylutska has been continuing her work from Germany, within a research project at the Max Planck Institute of Animal Behavior.

When Alona Prylutska looked in her refrigerator in the winter of 2012, it was full of bats. About 200 of the little mammals hung from the shelves in cloth bags to hibernate. The contents of her colleague Anton Vlaschenko’s balkony looked much the same. It was he who sparked Prylutska’s enthusiasm for bats. That was while she was studying biology in Kharkiv. Together they decided to take vulnerable bats home, feed them and help them to survive the winter. Refrigerators are ideal for this because they keep the temperature relatively constant and thus come quite close to the bats’ natural hibernacula roosts in caves. 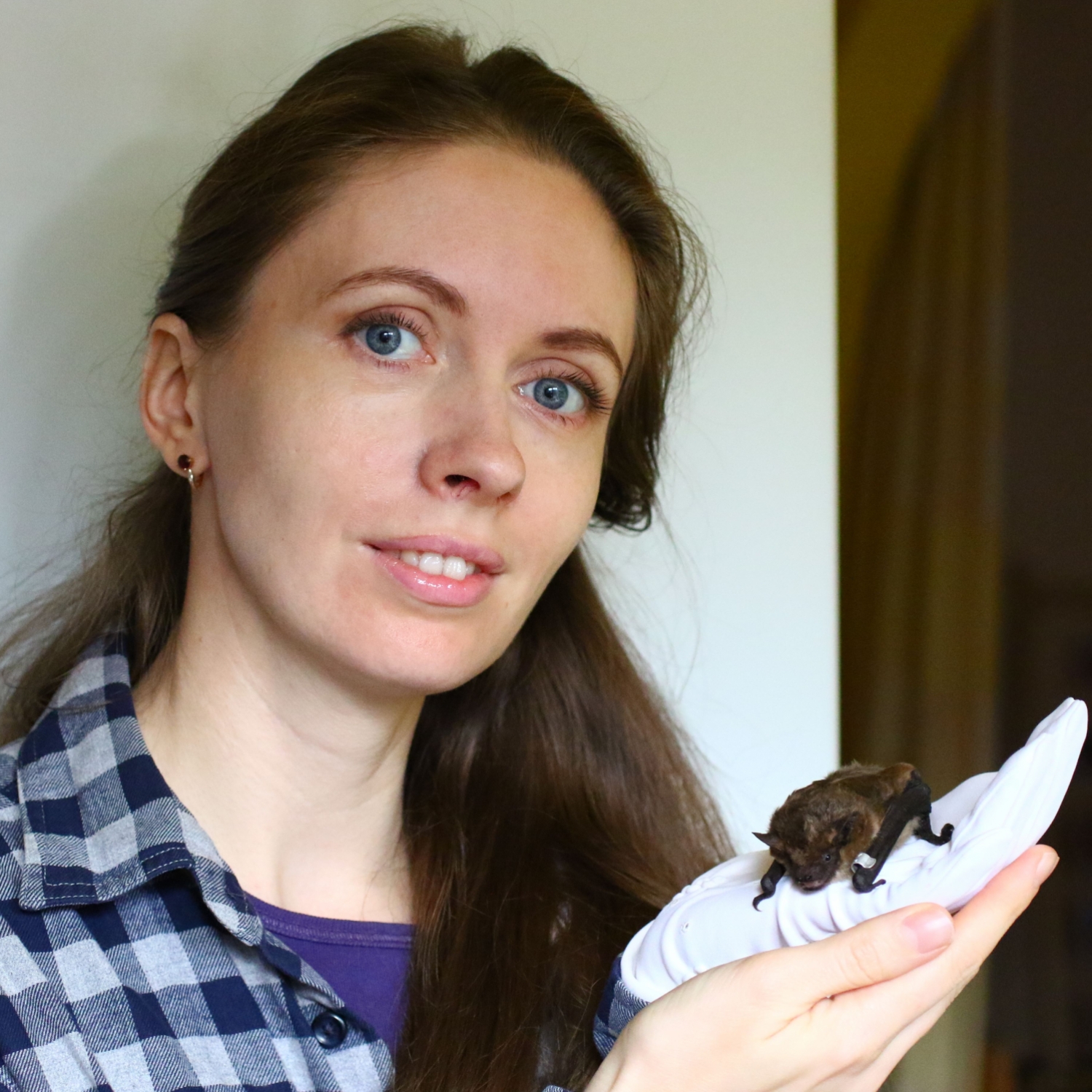 An endangered species
There are 28 bat species in Ukraine, and they are all on the Red List of Threatened Species. A major problem is the decline in insect populations caused, among other things, by the use of pesticides. The bats are literally running out of food. In addition, the number of suitable roosts continues to decrease. This is because the bats themselves do not build nests, they use existing tree hollows, caves and crevices for shelter. About 40 years ago, animals began coming to the towns and cities at a growing rate in the autumn in search of roosts for hibernation. Multistorey buildings with balconies and attics are particularly attractive. Crevices and cracks in the walls remind the animals of the rock faces where they hibernate in the wild. In search of suitable quarters, the creatures of the night fly into apartments and houses – and often fail to find their way back out again. Renovation and conversion work also causes problems because it drives bats out of their shelters or kills them. Bats are especially vulnerable in winter when they are unmoving due to hibernation process (with low body temperature, heart rate and breathing).

The “Ukrainian Bat Rehabilitation Center”
Because the number of rescued animals was rising from year to year, in 2013 Prylutska and Vlaschenko set up the “Ukrainian Bat Rehabilitation Center” in Kharkiv, with the support of a private sponsor who runs the “Feldman Ecopark” zoo. One of the NGO’s two facilities is also located in the zoo’s grounds: a large cage, known as the bat-collider, in which the bats can fly around at will and also hibernate in special bat boxes. The bat rescuers meanwhile take in vulnerable animals from throughout Ukraine, which, once they have been nursed back to health, hibernate in special refrigerators. The only vet in Ukraine who treats bats takes care of these injured or sick animals. In the summer, the animal welfarists also raise orphaned baby bats. In this way, the centre has so far saved over 25,000 animals, more than 6,000 in 2022 alone. In addition, the staff at the “Ukrainian Bat Rehabilitation Center” advise concerned citizens who have found a stranded bat via helpline (phone and social media).

“Everything changes when you can see and touch them, when you feel how fluffy and warm they are.”

Sharing the passion
Apart from rehabilitation and research, communication with the public is an essential part of the NGO’s work. Some people know hardly anything about bats and have negative preconceptions about them. Fearing diseases such as rabies, many animals and even whole colonies are killed. “That’s why one of our main goals is to change people’s opinions. We can’t save all the bats. We try, but the more we talk about them, about their problems and about protecting them, the more people will get involved,” explains Prylutska. A highlight is the annual “Bat Release Fest”, which first took place in the spring of 2013, when – before an audience of interested citizens – the bats are released into the wild after waking up from their hibernation at the “Bat Rehabilitation Center”. Prylutska says that letting a bat fly away out of your own hands is a very special experience. 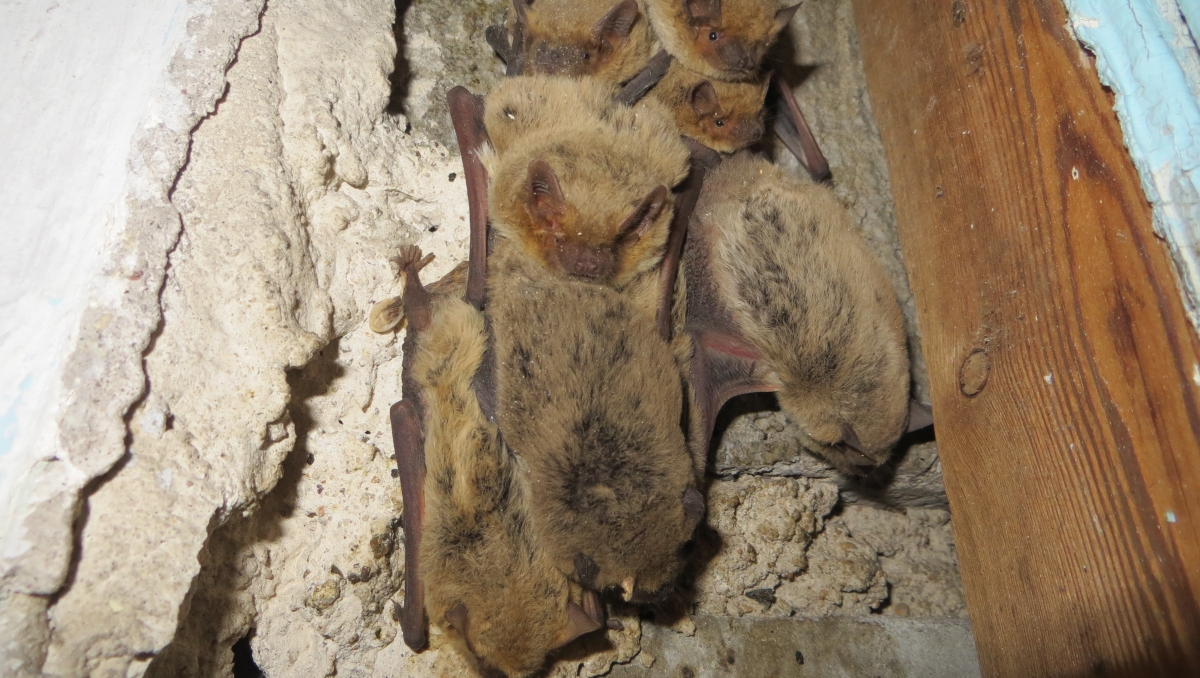 Some of the rescued bats Alona Prylutska and her team are taking care of.
1 of 8
Hide text 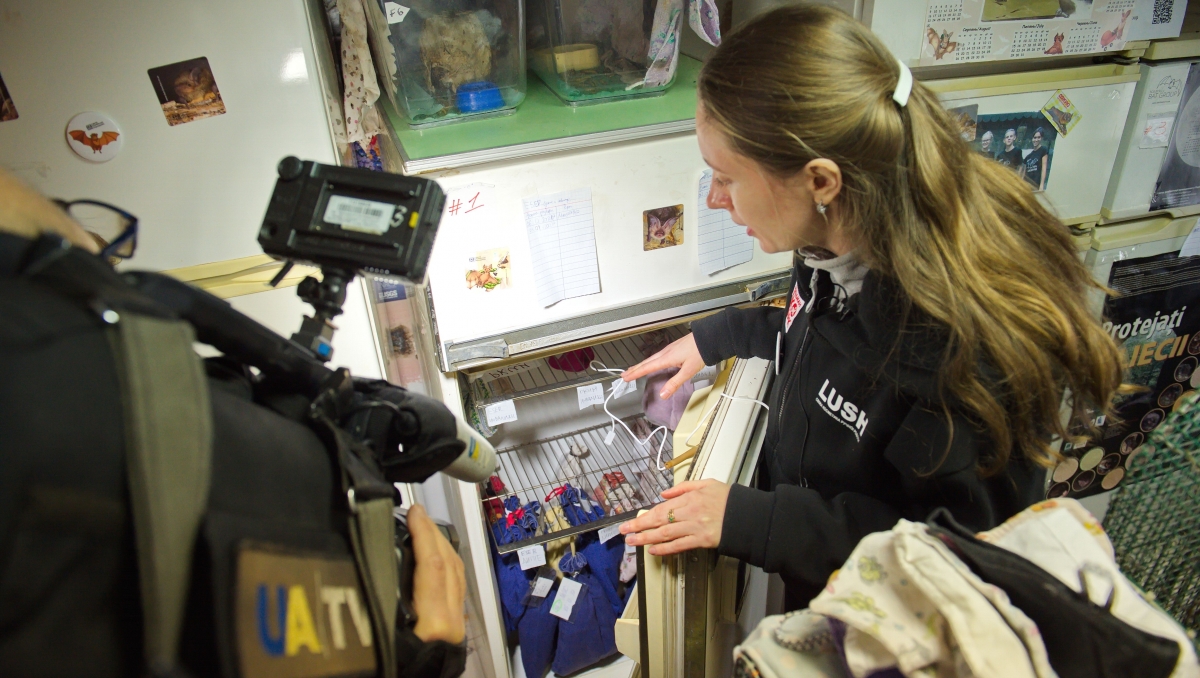 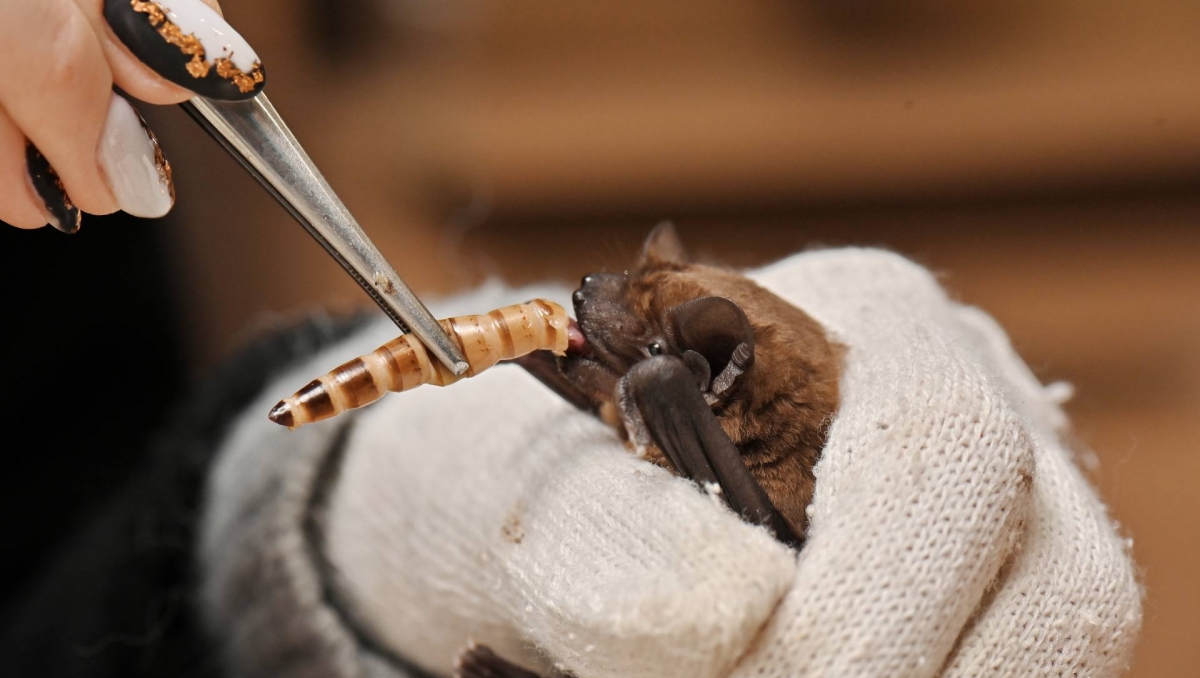 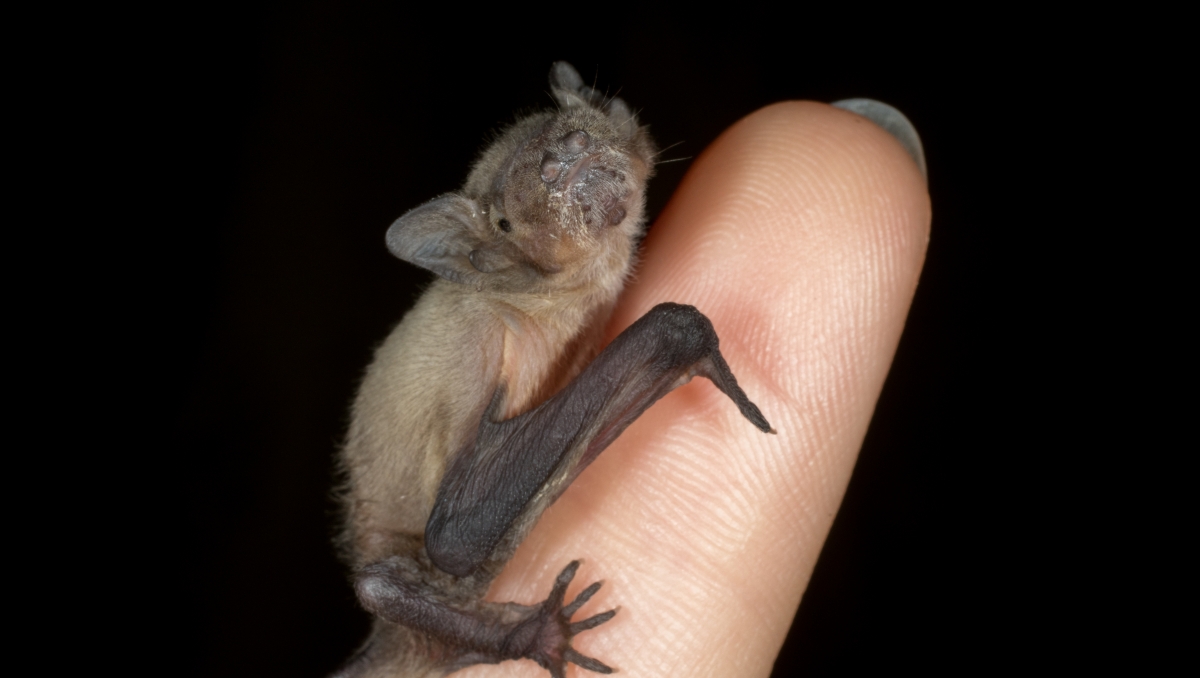 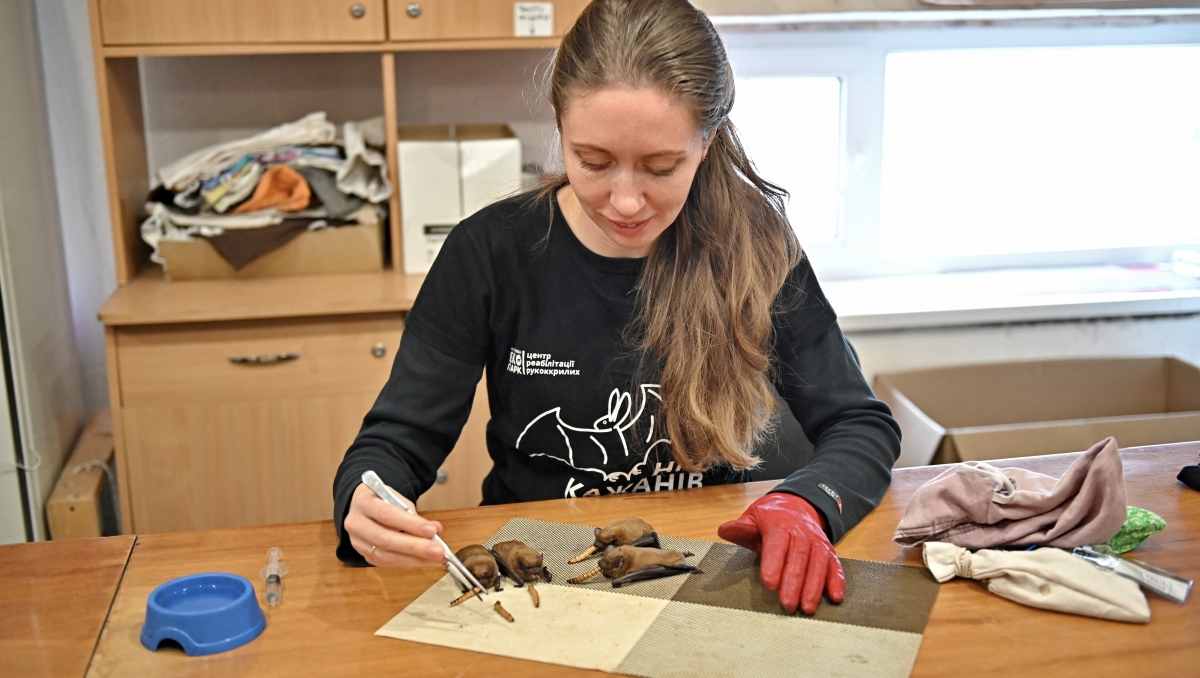 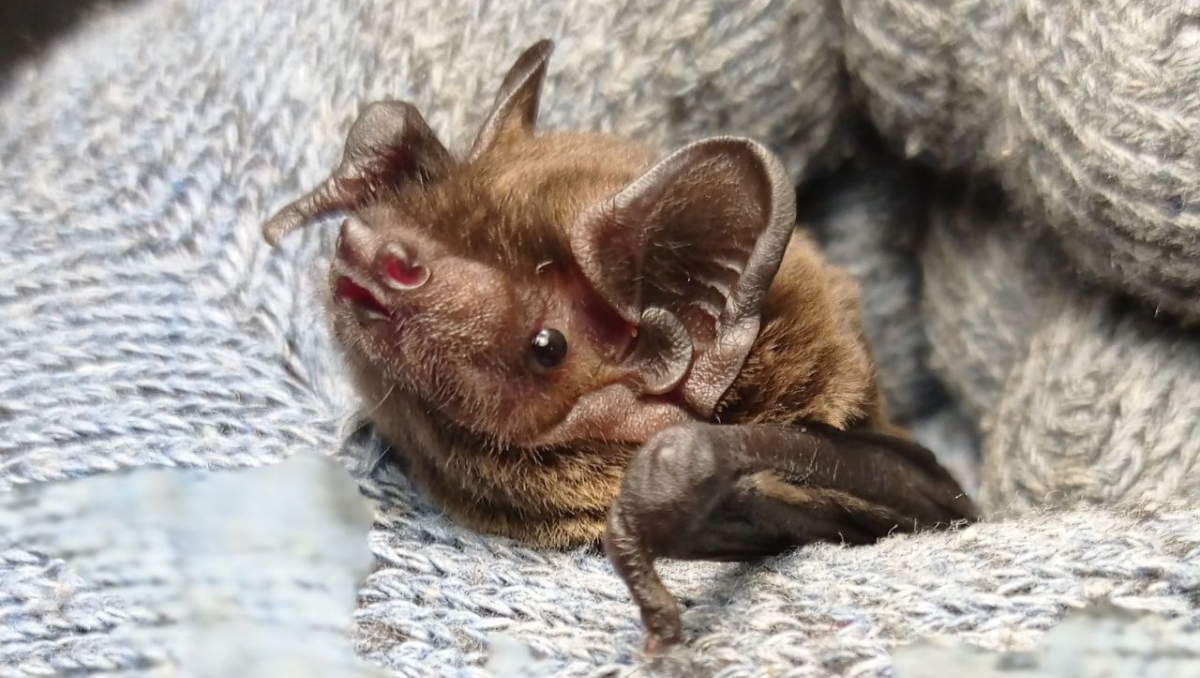 One of the rescued bats at th "Ukrainian Bat Rehabilitation Center".
6 of 8
Hide text 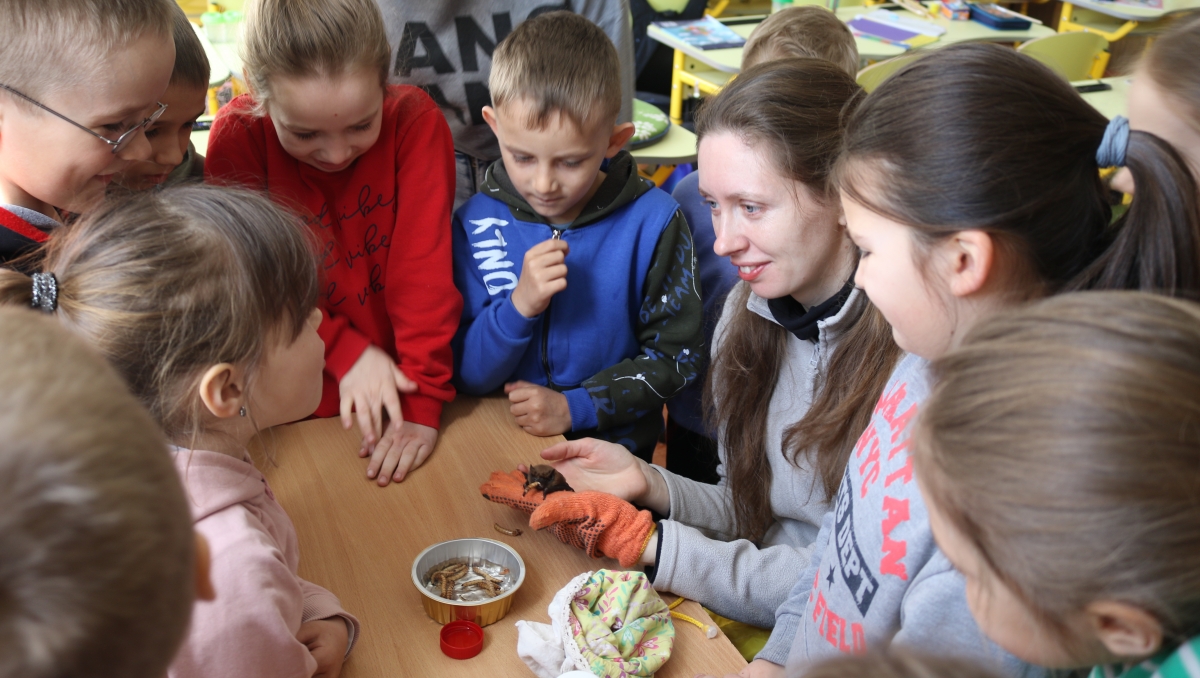 Lecture in school with Alona Prylutska.
7 of 8
Hide text 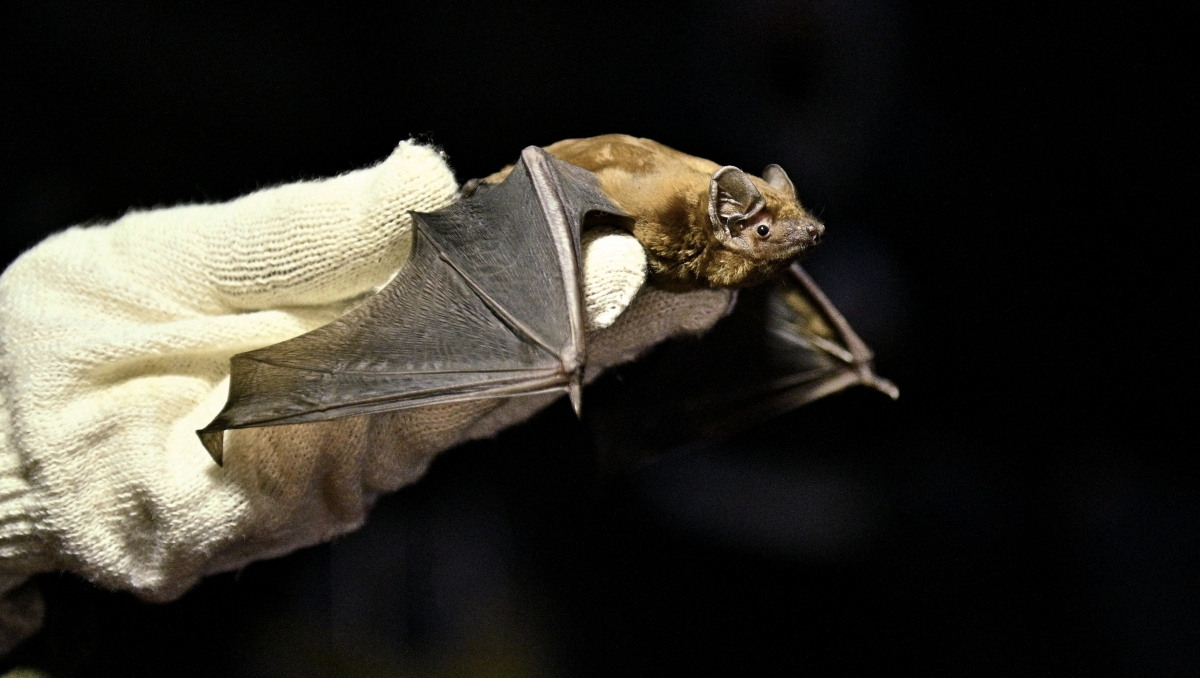 Alona Prylutska releases a rescued bat back to the wild.
8 of 8
Hide text

Rescuing bats in the war zone
Unfortunately, the festival could not take place in 2022. The war in Ukraine is threatening not only the lives of people; the bats’ situation has also deteriorated as a result of the attacks. Bat colonies which have settled in the buildings are destroyed along with them. Windows shattered by shelling, or the blast waves following explosions, turn the affected buildings into death traps. The bats fly into opened windows and get stuck in the gap between the window frames, are unable to escape unaided and perish after a few days.
Although continuing their work is very dangerous, for biologist Prylutska and her colleagues it is the obvious thing to do: “Needless to say, we can’t leave our helpless bats behind,” she explains. Nevertheless, the threat is clearly felt because Kharkiv is only 40 kilometres away from the Russian border. There was a large fire near their office in the city. The area around Feldman Ecopark is mined and unsafe to enter. Is their bat aviary still intact? They don’t know. Since it was unclear how the situation would develop, the bats had to be released into the wild earlier than usual in 2022. Staff from the “Bat Rehabilitation Center” took sick and injured animals home with them.

“We try to do our best, even if we find ourselves in dark and dangerous times.”

Joint research
As a project manager at the NGO, Prylutska is kept busy with organizational tasks and public relations. Thanks to a grant from the Carl Zeiss Foundation, she was able to accept an invitation to join a collaborative research project at the Max Planck Institute of Animal Behavior (MPI) and continue her work from Germany in support of the bats. Since November, the biologist has been in Radolfzell-Möggingen to conduct research on bats together with Dina Dechmann group from the MPI, with the aid of data analysis. She is very grateful for this opportunity to expand her knowledge and take part in a new project in a rich scientific environment.
However, the Ukrainian bats continue to flutter around in her mind: to keep up the educational work, she is currently planning an information event for Ukrainian refugees in the region. Wherever she goes, she tells people about the fluffy acrobats: “I enjoy that because I can see the impact. People’s attitude towards bats changes after my presentations and when we talk about them.”