The danger of broken bonds

Author of a new study showing that humans disturb the social lives of wild giraffes, Damien Farine discusses why disrupted relationships may be a silent killer for social species—even one of the world’s most recognizable animals.

This week, a group of international researchers from Switzerland, USA, and Germany released a report providing evidence that human presence can affect the social structure of giraffe populations. The researchers, who studied over 500 female giraffes in Tanzania, showed that giraffes living near human settlements have weaker bonds with other giraffes and fewer interactions with other members of their community.

Damien Farine, a Principal Investigator at the Centre for the Advanced Study of Collective Behaviour at the University of Konstanz and the co-located Max Planck Institute of Animal Behavior, is the senior author of the study. His work on a range of group-living animals—from birds to vampire bats—is shining a light on how the complex web of interactions that connects social animals is foundational to their survival. In the interview, which has been edited for length and clarity, he discusses how connectedness can be the difference between life and death, and why he hopes that preserving social structure will become a focus for conservation efforts.

Everybody knows giraffes, but almost nobody knows they are in decline in the wild. Why do you think that is?

What is super interesting about giraffes is that identifying the causes of their decline is hard. When you can’t identify the cause, you can’t make a story out of it, and so it stays out of the public’s awareness. There are probably a lot of factors that lead to their decline, mostly continuous encroachment of humans into the space that animals have. But it’s a subtle process—we can be talking about a tiny difference in the survival of baby giraffes that translates to individuals no longer replacing themselves in the population. The tragedy is that in animals that live for over 20 years, as giraffes do, this lack of replacement might not be immediately apparent. It is only when the old animals start to die and the population crashes that the dire state of the population becomes evident.

Your study focuses on the social lives of giraffes, but how social are they?

Anyone who goes out in nature in Africa and encounters these amazing animals can’t fail to notice that giraffes hang out in groups. But interestingly the social aspect of giraffes has largely been ignored by science. In the new study we examined the social relationships of 500 female giraffes and were surprised to find that they live in multilevel societies. That means, in this continuous population of giraffes living in the same landscape, we found subsets of individuals in the population that were consistently observed together, and that appeared to avoid other sets of individuals from the same population. This kind of social system that is not very common, even among social animals. 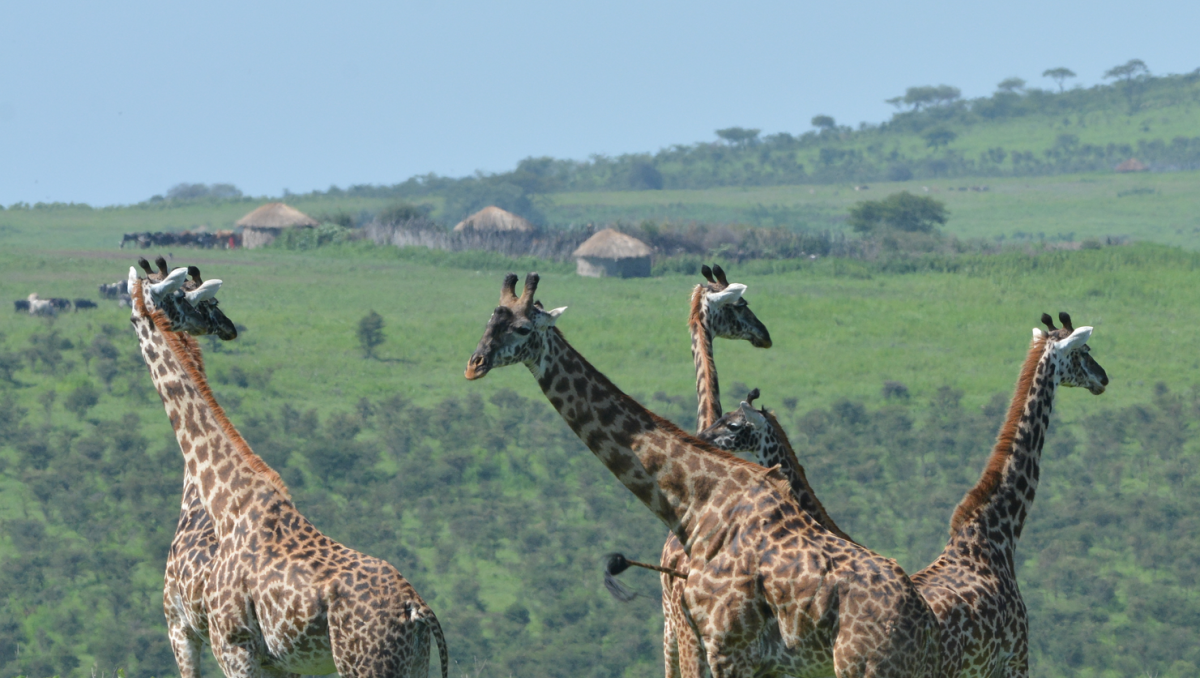 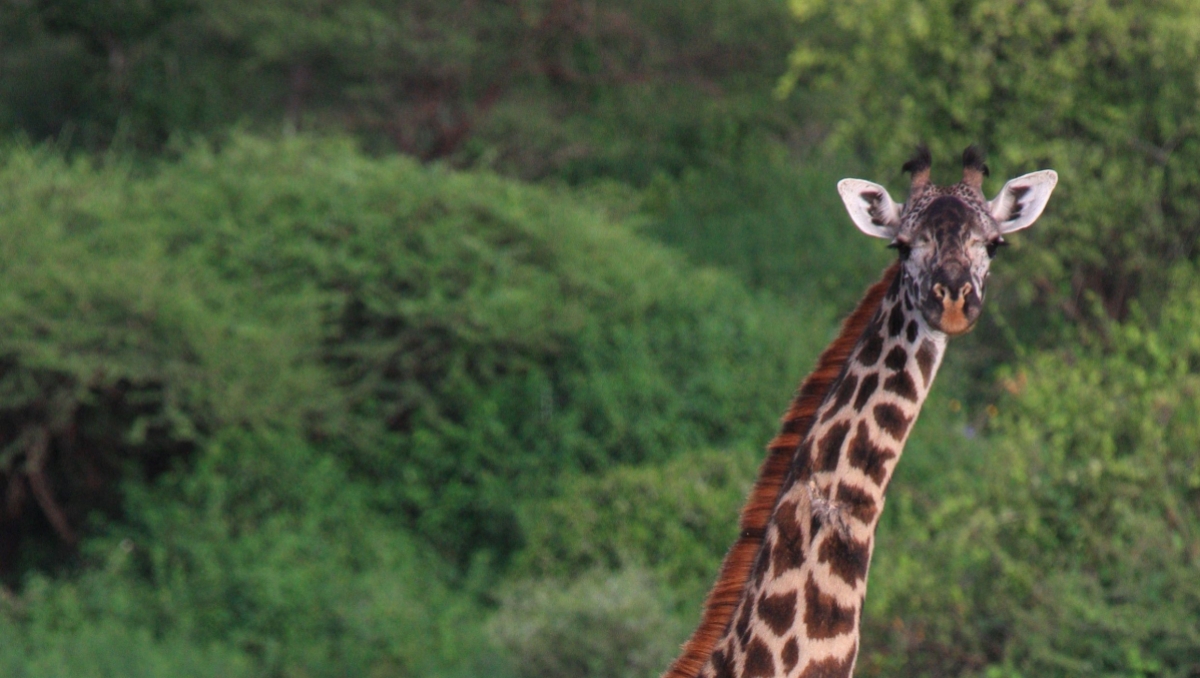 Last year you were the first to discover a multilevel society in a bird, the vulturine guineafowl. How do these birds and giraffes differ socially?

Both live in multilevel societies, but the difference is that in vulturine guineafowl the groups are very cohesive. The same individuals are together, day-in day-out, and these groups then encounter other groups. In giraffes, groups are drawn from a consistent larger pool of individuals—which we call communities—meaning that it not necessarily the same animals together from one day to the next. Communities overlap with other communities, but individuals from different communities tend to avoid one-another. 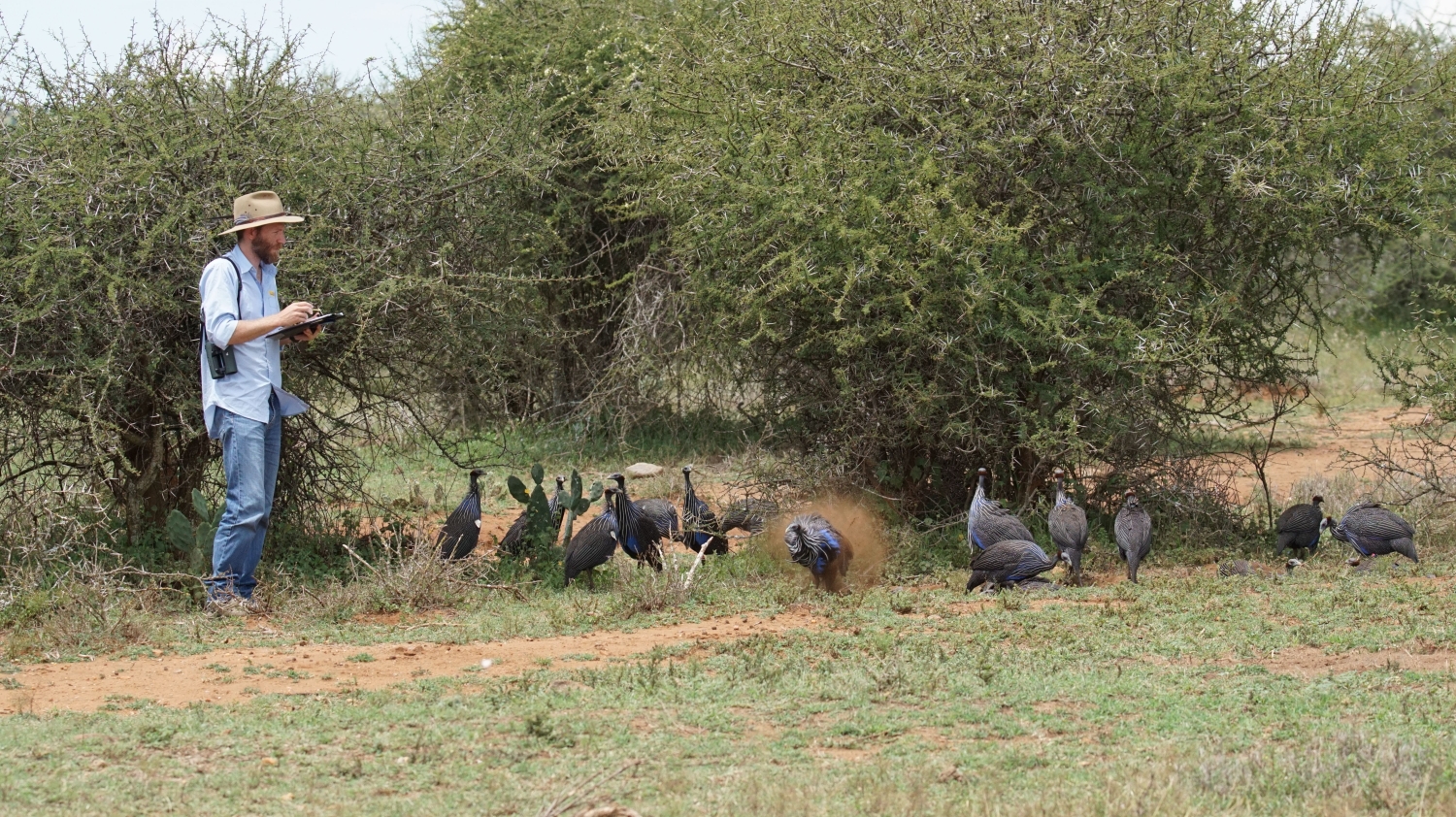 So you discovered that giraffes live in complex societies, but why did you investigate if this might be impacted by humans?

One of the things that can easily be disturbed, but where disturbances can be extremely hard to detect, is the social environment. I became aware of this after conducting lab experiments on zebra finches. These are small birds that live in highly social groups. We devised an experiment where we temporarily split group members into small subgroups for a few days, and then reunited them together. What we found is that these splits caused major changes to their social networks, and these changes led to reductions in the efficiency of groups to eat together. In other words, group instability had negative consequences for key behaviours that are important for the survival of the birds. Given that human presence could cause similar temporary splits among groups of giraffes, I suggested that we test whether the same patterns, or ‘signatures’ that were present in disturbed social networks of zebra finches, were also present in the communities of giraffes that overlapped with human settlements. The main strength of our study is that we could make this link between predictions that were developed from a laboratory-based study and a wild system that has direct conservation implications. 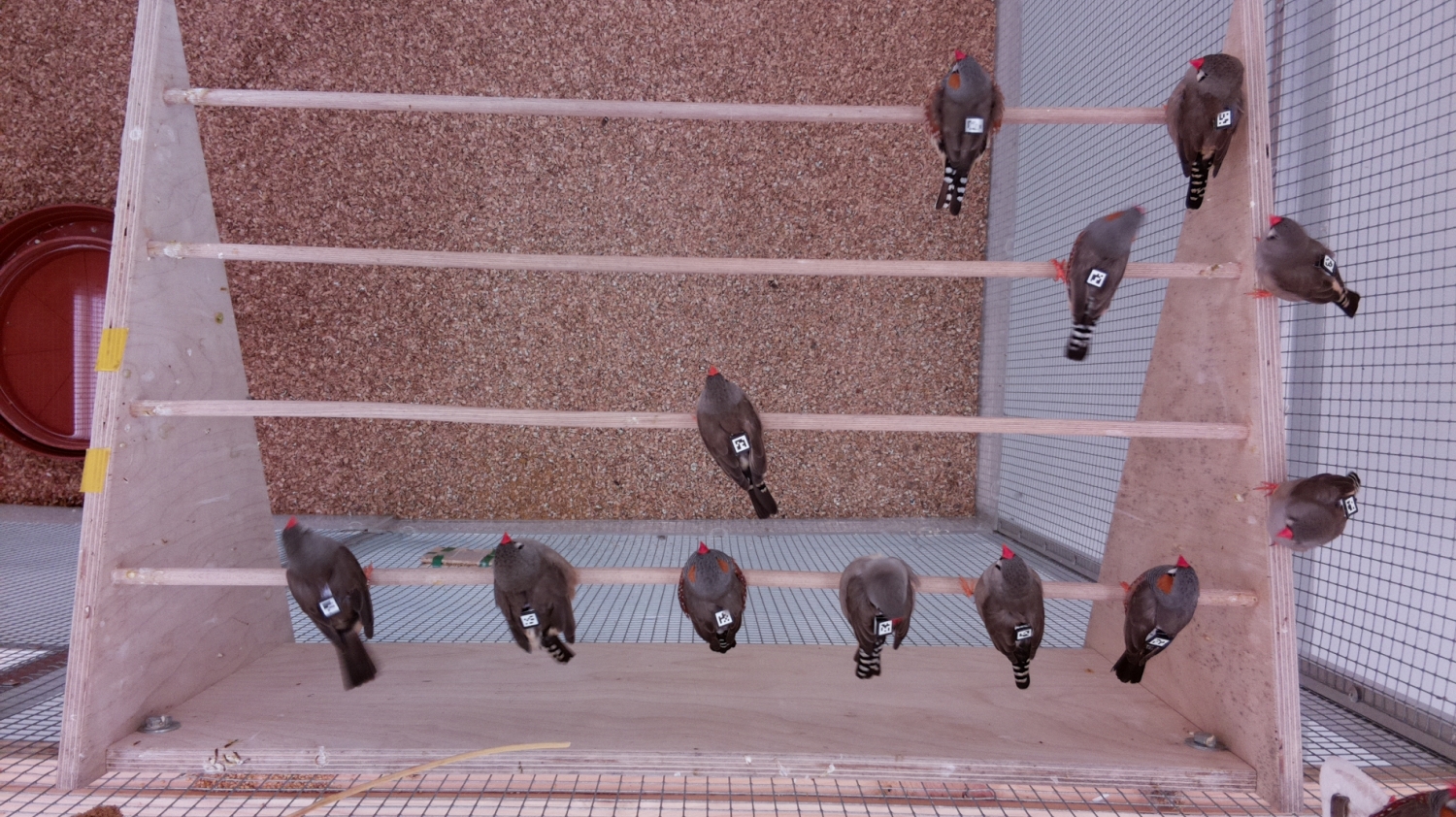 How exactly do humans weaken social bonds in giraffes?

This is still largely a work in progress. The presence of people could be diverting animals’ attention from what they are doing, like feeding or functioning as a group, thus causing them to split apart at higher rates. It could also be that some giraffes have a higher tolerance than others to the presence of people, meaning that groups split when close to humans because some giraffes choose not to remain so close. Humans have changed the ecology of environments—bringing more water, plants, and noise to settlements—and this could be attractive to some giraffes but not others.

And once these social bonds are disturbed, how does this impact survival?

Imagine you got left in the forest with some people and you all have to figure out how to survive. You might do that much better with people you have experience with compared with complete strangers. It’s about the trust and understanding that comes from a strongly linked social history. I was involved with a project on vampire bats which showed that the blood-sucking mammals build friendships by starting slow with low-cost interactions that deepen over time into potentially life-saving bonds. The finches, the giraffes, the vampire bats: these parts all fit together and the common foundation is the importance of the unity of the social group.

Is there any way of knowing definitively if social disruption is a cause for decline in giraffes?

It will always be challenging getting a definitive answer without proper experiments. In zebra finches, we have plans to test if splitting groups has flow-on effects to reproduction or offspring survival. But we could never do that in giraffes. Still, I hope that the combination of our laboratory and wild studies encourages more thought into conserving an animal’s social network, because human encroachment can have more impact that just limiting the range of where animals live.

What are your future plans?

My ERC Starting Grant is focused on testing how long term processes, such as social relationships and seasonal changes in the environment, affects how the group behaves on a moment-by-moment basis, such as how they make decisions. Many of the things that make a huge difference in life happen over very short time moments: predation can take place in the blink of an eye, or starvation can happen over a few days. The ability of animal groups to buffer these profound impacts could rely on the strength and quality of the relationships that they might have. 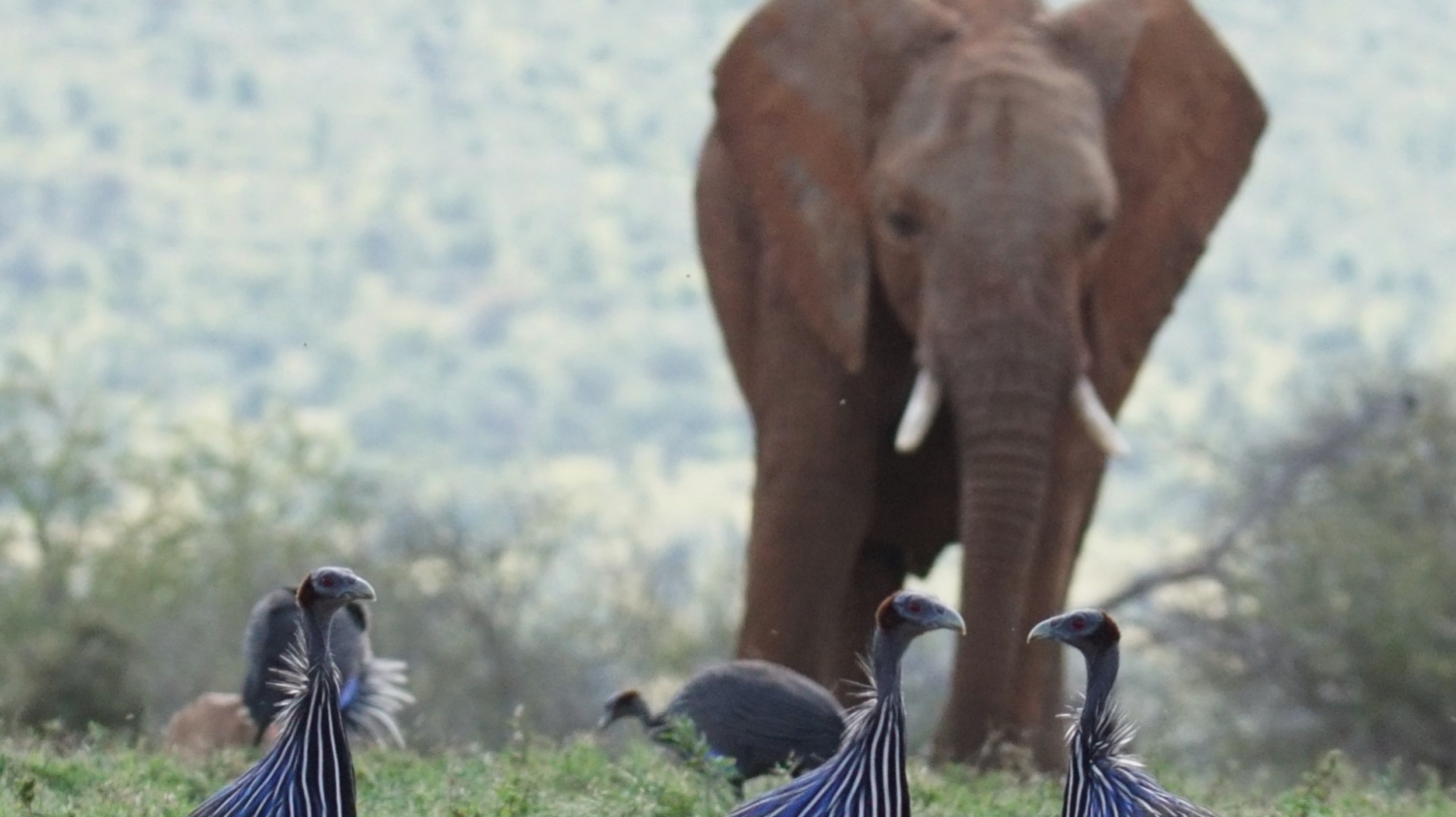 The Vulturine Guineafowl Project, funded by an ERC Starting Grant, aims to understand the interplay between collective behaviour and the environment.